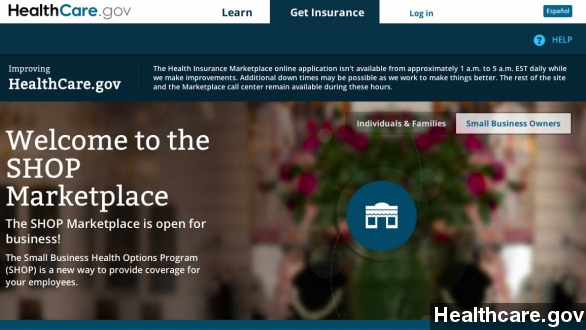 The administration now says small businesses won't be able to use Healthcare.gov to enroll in insurance exchanges until November 2014.

The Obama administration has been racing to get the Healthcare.gov website working for individuals in the 36 states without their own exchanges, but now it says a different part of the site will be delayed again — this time for an entire year.

JEFFREY ZIENTS: "By the end of November, Healthcare.gov will work smoothly for the vast majority of users." (Via ​NBC)

With that deadline days away, administration officials have set about lowering expectations. They've gone from saying Healthcare.gov would be fully functional to saying it will be noticeably improved.

But the part of the site devoted to small businesses appears to have gotten the axe. In a blog post, a spokesperson for Health and Human Services said small businesses will be able to enroll in health insurance exchanges through "direct enrollment" via insurance agents and brokers starting January 1. (Via Healthcare.gov)

Noticeably missing from the announcement — the ability to enroll using the Healthcare.gov website. That option was supposed to be available for small businesses starting this month. Instead, they'll have to wait until November 2014.

This is the second delay for the small business portion of the site. Politico explains why the administration is kicking the can. (Via Healthcare.gov)

"The administration is focused on its goal of signing up 7 million through Obamacare exchanges through the individual marketplaces. That doesn’t count on small business enrollment, which is why Obamacare critics and advocates say the small-business exchanges ... are further down on the administration’s priority list."

But the delay means they'll have to sign up in a more complicated way, prompting the chairman of the House Small Business Committee to tell NPR: "If small firms failed to provide services this frequently, they would be fired. ... This pattern of continued delay and disarray is especially disappointing."

Republicans used the announcement as another opportunity to say the Affordable Care Act should be repealed.