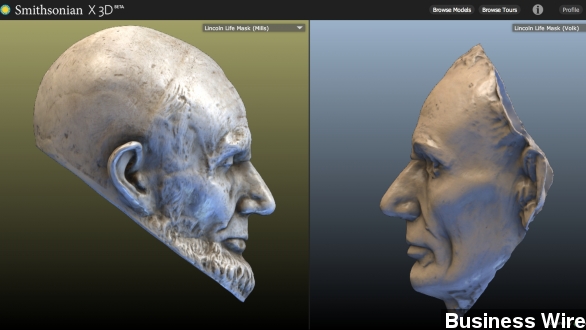 Wednesday the Smithsonian introduced an online tool that allows users to explore artifacts in 3D.

1The Smithsonian can't display even one percent of its collection at any one time. With more than 137 million artifacts, there are pieces you'll just never see.

This can help. Meet Smithsonian X 3D Explorer. It's an interactive library containing 3D renderings of some of the museum's pieces. (Via Smithsonian)

It launched Wednesday with about 20 different models, including Amelia Earhart's flight suit. (Via Smithsonian)

A member of Autodesk, the company that built the tool for the Smithsonian, tells Gizmodo: "The X3D Explorer is for the public to be able to get access to this digitized version of the artifacts. It is a 3D story-telling tool that is more than just viewing."

You can zoom in, spin the object around and even change its color because – well, because why not? Or if you'd like a more musesum-y experience, try the guided tours. Here you can get more in-depth details. (Via Smithsonian)

By 3D scanning artifacts, like this gun boat, the Smithsonian's tool is encouraging a deeper understanding.

"The gun boat itself is in very, very close quarters. So even if you're able to come to the Smithsonian in person, you can only see a small portion of it." (Via Smithsonian)

But if you really want to get hands-on, get yourself a 3D printer. According to Autodesk's press release, "Many of the 3D models are available to download for personal and educational use, including the ability to produce physical objects using 3D printing." (Via Smithsonian)

The Smithsonian is reportedly putting $350,000 per year into 3D digitization. But if you can't wait, you can search through the museum's online collection of more than 8 million 2D items.