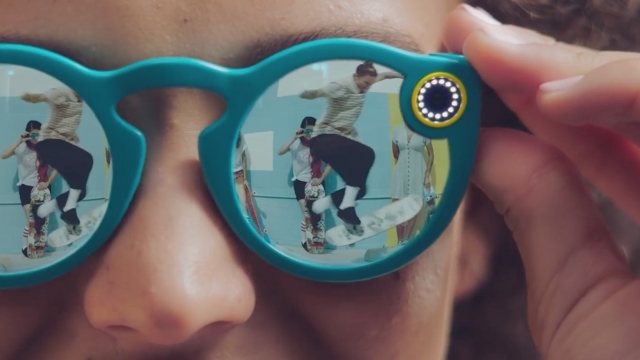 The company announced a rebrand along with new sunglasses that can record footage.

Snapchat is breaking into the fashion industry — kind of. The company just revealed Spectacles: sunglasses that record video.

The glasses allow wearers to record their daily activities in first-person. Like with the traditional phone app, the glasses record videos in 10-second increments.

SEE MORE: Snapchat Might Start Selling Ads Based On What's In Your Photos

Snapchat's CEO Evan Spiegel told The Wall Street Journal the camera has a 115-degree-angle lens, which is closer to the human eye's natural field of view.

It also records circular video. So, rather than be optimized for the rectangular shape of a smartphone, the video is shaped more like what a person is actually seeing.

But that technology and the freedom to use both hands comes at a price; the glasses cost about $130.

Which is pretty cheap compared to Google's smart glasses. Those lenses can cost more than $1,400 for the latest versions. It's also worth noting that Google shut down commercial sales of Glass last year amid privacy and fashion concerns. Google Glass is now mostly sold for enterprise use, leaving Snapchat an opportunity to step in where Google failed.

Along with the glasses reveal, Spiegel announced a company rebrand. Now, Snapchat's website reads Snap Inc., and the homepage says it's a camera company.

This is the first piece of hardware from the company, and some say they believe this is just the beginning of a series of business ventures.

The glasses will be available in three colors. When asked about why he released the lenses now, Spiegel said the Spectacles were just for fun.