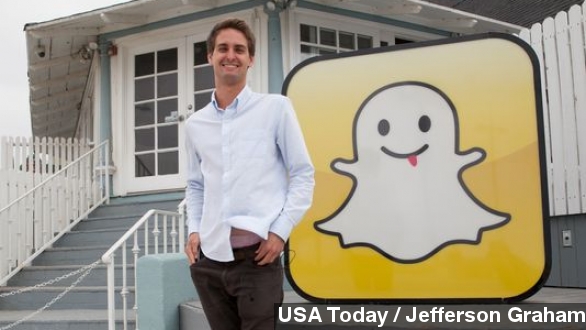 The disappearing messages service spurned an offer from Facebook for a second time, as some experts say it seeks a higher valuation.

Although it has yet to make any revenue, ephemeral mobile messaging service Snapchat reportedly turned down a $3 billion acquisition offer from Facebook — straight cash.

The Wall Street Journal broke the news, saying the rejected offer comes at a time when Snapchat is getting some serious attention from other investors and potential acquirers, such as Chinese e-commerce company Tencent Holdings. (Via Snapchat)

The Journal reports the Chinese company offered to lead an investment that would've valued Snapchat at $4 billion, but the folks at Snapchat might be waiting for something bigger.

The paper cites anonymous sources, saying, "Evan Spiegel, Snapchat's 23-year-old co-founder and CEO, will not likely consider an acquisition or an investment at least until early next year. ... Spiegel is hoping Snapchat's numbers ... will grow enough by then to justify an even larger valuation."

Snapchat has spurned an advance from Facebook before. The social media site reportedly offered Snapchat a $1 billion buyout in 2012. When Snapchat dissed it the first time, Facebook created its own ephemeral messaging app called Poke — which was a dud. (Via The Verge)

So, why the interest in the top choice for sending disappearing pictures? Well, the answer is in who's actually using Snapchat.

Compare that to a Pew Research study that found 9 percent of U.S. cell phone owners use Snapchat. Although the company has never released total users, Pew also suggests Snapchat could have close to 26 million U.S. users — more than half the number of Americans on Instagram. (Via Forbes)

With potentially tens of millions of users, Snapchat still isn't profitable. But it does know how to raise a dollar or two.

And whatever you do, don't call the people at Snapchat crazy for turning down a $3 billion acquisition offer. A writer for CNN says the company was smart to hold out because it has something other social media services don't: erasable messages.

"Snapchat and its investors seem to believe that this company is the next generation of social networking — not an add-on to the dominant incumbent. Snapchat is about immediate/disposable communication, not permanent record-keeping."

And here's one more thing to think about: Another revenue-less, short-messaging company is valued at nearly $25 billion after its IPO last week. We're talking about Twitter, of course.