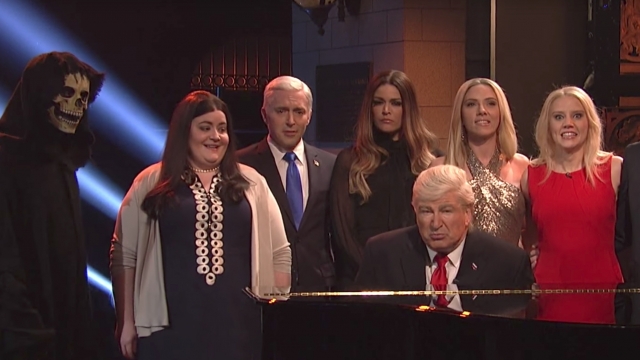 "Saturday Night Live" wrapped up its season this weekend, its most-watched season since the early '90s.

A large part of that success is due to Alec Baldwin's portrayal of then-candidate and now President Donald Trump alongside Kate McKinnon's Kellyanne Conway, Beck Bennett's Mike Pence and shirtless Vladimir Putin, and a handful of other Trump staffers and surrogates who have gotten plenty of screen time in recent months.

Melissa McCarthy's portrayal of White House press secretary Sean Spicer, aka "Spicey," was so popular that she came back for repeated appearances. Spicer himself even commented on the performance.

The show's popularity caught a lot of attention from Trump, whose administration was at the center of many weekly jokes for the show's 11 million viewers, on  average.

.@NBCNews is bad but Saturday Night Live is the worst of NBC. Not funny, cast is terrible, always a complete hit job. Really bad television!

In the downtime before next season, the show's "Weekend Update," hosted by Colin Jost and Michael Che, will air four stand-alone episodes starting Aug. 10.

Correction: An earlier version of this story incorrectly stated that Season 42 of "SNL" was the most-watched season in the show's history.