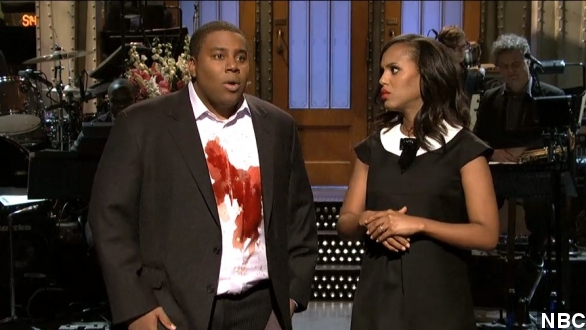 The show's creator and executive producer told reporters they plans to add at least one black female cast member to the show in January.

Saturday Night Live is looking to diversify their cast by adding one new member. We're not sure exactly who that person is, but Lorne Michaels and Co. are reportedly searching for a black female to join their lineup.

The New York Times reports the folks at SNL held a special audition on the show's stage Monday for seven to eight black female performers, one of whom will get their start in January. (Via NBC)

Michaels, who is the creator and executive producer of the show, told The Times "We've seen about 25 people. A lot of the people we saw are really good. Hopefully we'll come out of the process well."

Comedians Gabrielle Daniels and Simone Shepard both posted this picture on their respective social media accounts earlier this month. It's believed to be a snapshot of SNL candidates sometime during another secret audition at L.A.'s Groundlings Theater. (Via Gothamist)

Michaels added that as many as two performers could be considered, but said the chances of that are less likely considering five of the 10 repertory players are women.

The SNL scouting venture comes on the heels of critical comments about the show's diversity from its two black cast members — Jay Pharoah and Kenan Thompson. Both spoke out after SNL announced the six new cast members for the 2013 season. (Via The Hollywood Reporter)

Pharoah told The Grio in Sept. producers on the show "need to pay attention" and "follow up" on what he said was a promise to add black female talent the previous season.

The 11-year SNL veteran told TV Guide in an interview he was done cross-dressing but blamed the lack of female talent on, well, the talent. "It's just a tough part of the business. ... Like in auditions, they just never find ones that are ready."

Although the show employs three cast members of color — Pharoah, Thompson and Iranian-American Nasim Pedrad — the next black female hire, or hires, will be in small company. There have only been four black female cast members in the show's history — the last being Maya Rudolph who left in 2007.