So, Is Immigration Reform Ever Really Happening? 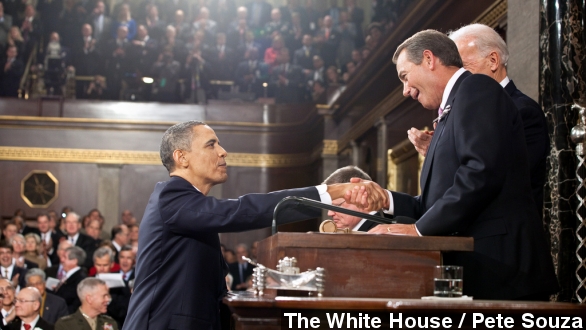 House district demographics and comments from Speaker Boehner seem to suggest no — not this year, at least.

​It’s been 22 weeks since the Senate passed immigration reform and in the House, it’s going nowhere. That has a few people upset.

MAN IN THE AUDIENCE: “You have a power to stop deportations for everyone!”

This happened Monday. As President Obama gave a speech urging a House vote on the issue, an immigration reform activist actually chosen to stand behind the president began a plea to Obama to end deportations until reform is achieved. (Via The Washington Post)

And that reform could take a while. In fact, there’s no indication Republican leaders in the House have any intention of taking a vote on the matter, much less jumping on board.

BOEHNER: “I’ve made it clear since the day after the election that it’s time to get this done.” (Via YouTube / Change Nation)

He pretty much squashed hopes of reform at a news conference.

BOEHNER: “Frankly, I’ll make clear we have no intention of ever going to conference on the Senate bill.” (Via MSNBC)

Now, Boehner says he’s not opposed to reform — just the reform the Senate passed. The “path to citizenship” clause has many House conservatives especially upset, labeling the measure amnesty.

And Molly Ball at The Atlantic writes that opposition has some reform advocates taking “a more aggressive tack, arguing that lobbying is over — it’s time for revenge.”

Specifically, that comes in the form of ads like this.

REP. MO BROOK: “I’ll do anything short of shooting them.”

NARRATOR: “When you listen to what the Republican say about immigrants, it makes you wonder if they believe in this country as much as we do.” (Via AFL-CIO)

Advocacy groups like the AFL-CIO are hoping Hispanic populations in GOP districts throw out Republican lawmakers who have been holding up immigration reform.

But as shown in this graph from National Journal, House district demographics put very few Republicans at risk on this issue — and therefore put little pressure on them to back the Senate’s reform bill.