So SpaceX And Blue Origin Can Land Rockets. Now What? 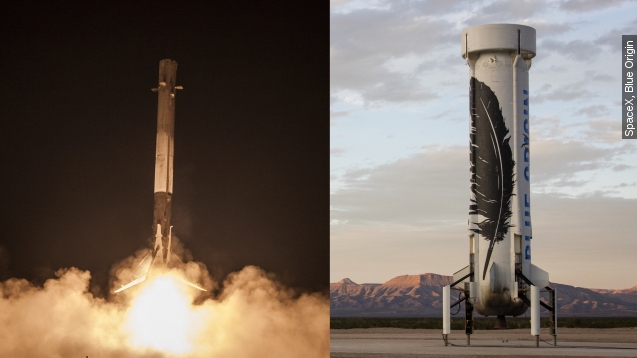 SpaceX and Blue Origin have shown they can send rockets to space and back intact, but there are plenty more milestones on the way to reusability.

There are now two private companies that can send rockets into space and bring them back to the launchpad intact. So ... now what?

For all the hype about landing rockets lately, that's not really the goal — reusability is. As cool as it's been to see 30-ton rockets land like ballerinas, it would be a waste of money and fuel if the companies weren't working toward something more important. (Videos via SpaceX, Blue Origin)

For most of the history of space travel, the rockets that flew humans and our gadgets into orbit were either dumped in the ocean or left to burn up in the atmosphere. That's expensive. (Video via NASA)

"Throwing rockets away is like getting in your 747 and flying across the country and then throwing the 747 away," Jeff Bezos told CBS.

NASA's Space Shuttle was our best attempt at reusability. The shuttle itself touched down like a plane, and the rocket boosters parachuted down to the ocean and were refurbished. But it took months, millions of work hours and a whole new fuel tank to get it flying again. (Video via NASA)

What SpaceX, Blue Origin and others are after is something closer to an actual 747: It lands, it refuels, it takes off again. Repeat a thousand times.

"It would allow for about a hundredfold reduction in launch costs," Elon Musk told the National Press Club in 2011.

Now, cutting costs doesn't sound all that exciting, but look at it this way: SpaceX advertises a price of around $2,000 per pound to get something into low Earth orbit. What if it was less than $100 per pound? (Video via NASA)

Our space exploration dreams could finally become realities. Moon bases? Why not? Asteroid mines? Sure! Deep space habitats, orbital manufacturing, Mars colonies — everything that seems just out of reach now would become feasible. (Videos via Planetary Resources, Made In Space, Mars One)

The truly fun part is that we can't even guess what else might happen. Entire new industries could appear based solely on the fact that space travel isn't just for big companies and governments anymore.

Neither SpaceX nor Blue Origin has proven that its rockets are reusable yet, though. They looked good on the launch pads, but we still don't know what shape they're in or how much work it would take to get them flying again.

So the next milestone is to launch the same rocket twice. Then, three, four and five times, reducing the cost and time between launches. Hopefully, we're watching a whole new era of spaceflight just getting off the ground.