So What If Trey Radel Listens To Hip-Hop? 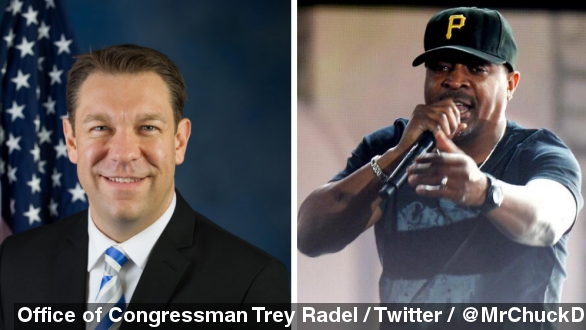 Florida Congressman Trey Radel's affinity for hip-hop music often comes up in media reports about his substance abuse. But is it relevant?

Do you know Anthony Weiner's favorite genre of music? How about Toronto Mayor Rob Ford? No?

"A tea party darling and self professed hip-hop congressman ... He's also boasted of his love for rap music."

"All in all, a devastating day for the hip-hop-loving first-term conservative." (Via ABC)

"Radel, who calls himself a hip-hop conservative ... " (Via HLN)

"Congressman Trey Radel is the self-proclaimed hip-hop conservative." (Via MSNBC)

Which — rightfully so — plunged the congressman into the spotlight, but for some reason, his choice in music became a seemingly relevant tidbit of information. If you're wondering where all this "hip-hop conservative" stuff came from, well, there are a few places.

One, his Twitter page, where he has "Hip Hop Conservative" written in his bio, and he occasionally gives a rap recommendation or two.

He also wrote a piece in BuzzFeed explaining his love for hip-hop where he says, in part: "My love of hip hop never ceased and included the aforementioned Chuck D of Public Enemy. ... I find a conservative message in 'Fight the Power' because I believe when government expands it becomes a political tool meant to oppress."

But the big question is: Why does Congressman Radel's music choice matter? We don't think it does.