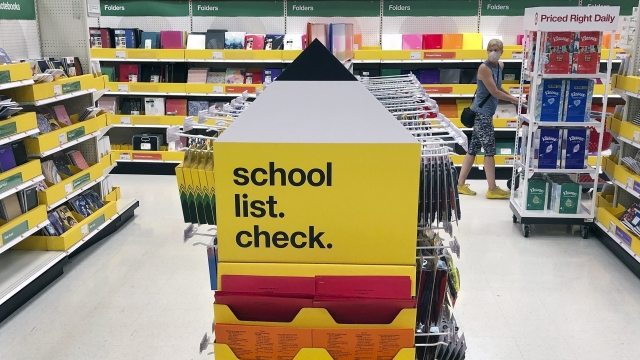 Teachers typically rely on their own money or donations to help prepare for a new school year, but now social media influencers are joining the cause.

Social media influencers are known for sharing everything from fashion trends to travel inspirations. But their influence spans far beyond trivial pursuits ahead of this school year.

Every year, teacher Tara McGowan creates a wish list for her classroom on websites like Amazon and Donors Choose. They're full of supplies for students that her school in Laurel, Maryland, doesn't provide.

Typically, she relies on friends and family for help. But this year, she turned to influencers too, and it made a significant difference.

Teachers On TikTok Give Inside Look Into The Profession

Teachers sharing more about their classroom and teaching style are making their rounds on TikTok, giving viewers a behind-the-scenes look at the job.

McGowan teaches kindergarten at a Title I school, meaning most of her students come from low-income families. That makes her mission to provide them with everything they need in class — from crayons to pencils — even more crucial.

"You never want to make them feel less than because they don't have something," McGowan said. "So having things readily available for them is so helpful."

McGowan's wish list was featured on the anonymously run Instagram account called "Things I Bought And Liked," which has over 500,000 followers. But that was just one of the many influencers participating in the effort to help out.

For the past month, Hayden Cohen has been encouraging his 325,000 followers to clear over 50 lists for teachers. He says he's seen a ton of success so far, but he knows there's still a lot of demand for help.

"I probably got over 2,500 emails from people submitting their lists," he said. "Then countless other direct messages from people responding with their Amazon wish list."

It's become common for teachers to create these lists as a budget for supplies isn't guaranteed at every school.

This is McGowan's first time in 12 years of teaching that she's even getting a budget — $200.

"That $200 sounds like a lot of money at times, but it gets spent very quickly," she said.

Another problem most teachers face is not being able to afford many supplies due to low pay — an issue compounded by inflation.

According to the nonprofit Adopt A Classroom, teachers spent an average of $750 out of pocket during the 2020-2021 school year on supplies. This year, that number is expected to climb.

Teachers like McGowan say their reliance on donations to do their job is troubling, especially after working through all of the challenges brought on by the pandemic.

"It's a global problem in education," McGowan said. "We expect a lot from our teachers, but how we're getting there and where it's coming from and how it's getting funded can get a little gray at times."

Looking forward, McGowan says she still feels grateful about the donations she's received and is just excited to be back in the classroom full time.