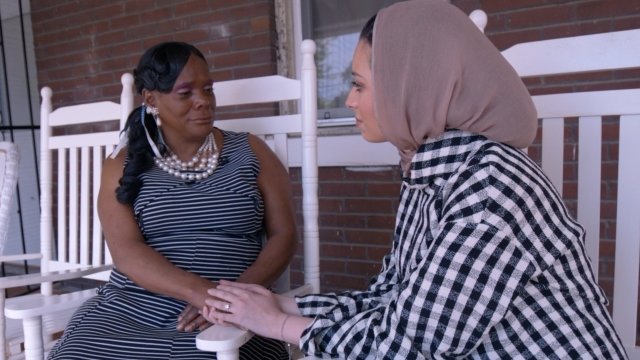 Across the U.S., thousands of people are trafficked for sex each year. Newsy spoke to survivors and explored what can be done to help.

Want to check our facts?

Thousands of people are trafficked for sex in the U.S. each year. Polaris, which runs the National Human Trafficking Hotline, received more than 4,000 reports of potential sex trafficking in the most recent year statistics are available.

The Department of Justice defines sex trafficking as when "a commercial sex act is induced by force, fraud, or coercion, or in which the person induced to perform such act has not attained 18 years of age."

Beth Bouchard is a case coordinator with the Child Advocacy Center of Suffolk County in Boston. Of the cases of exploitation that Bouchard and her colleagues work on, she says about two-thirds are kids of color and more than three in four have a history of child abuse.

Ashley Cacho said she could have been arrested for running away from her placement. A human rights organization called Rights4Girls has published a report on what they call the Sex Abuse to Prison Pipeline, which talks about ways minors are criminalized for the ways they react to abuse.

The National Center for Missing and Exploited Children is a useful resource for understanding child sex trafficking. They report that of their cases of likely sex trafficking, 88% were in the care of social services when they went missing.

Up to 88% of trafficking victims saw a medical professional while they were being exploited — but doctors are missing the signs.

Ann Wilkinson is director of mentor services at My Life, My Choice in Boston.

Covington, Kentucky is dealing with some of the highest overdose rates in the state, according to the Kentucky Office Of Drug Control Policy.

Drug overdose deaths are now the leading cause of death among Americans under 50.

We called officials in the top 15 states for overdoses in the country according to the CDC. Among the top five states, Kentucky and Ohio do publish an annual report that includes information on how drugs are intersecting with human trafficking. However, West Virginia, New Hampshire and Pennsylvania do not. West Virginia told Newsy they just started to collect empirical data on the intersection of the two issues because of the "overwhelming anecdotal evidence."

Kentucky's annual report shows that more than a third of cases of child sex trafficking involved drugs in some way. Newsy requested more information on the overlap of these issues and learned that of the 80 alleged victims in which drugs were provided to or involved in the trafficking, the age range of alleged victims is 2 - 17 years old.

Information on how the Kentucky Attorney General's office is working to combat sex trafficking, including information on the grant the state received from the Department of Justice.

Angela Renfro is the founder of the Kristy Love foundation in Louisville, Kentucky.

More from Sold in America

Sold In America: The Buyers

Newsy examines the nationwide effort to crack down on the buying of sex and how that affects people who sell sex to survive.

Sex. Profit. Violence. This is America's sex trade like you've never seen it.