Some Californians "Not Ready" As State Lifts Restrictions 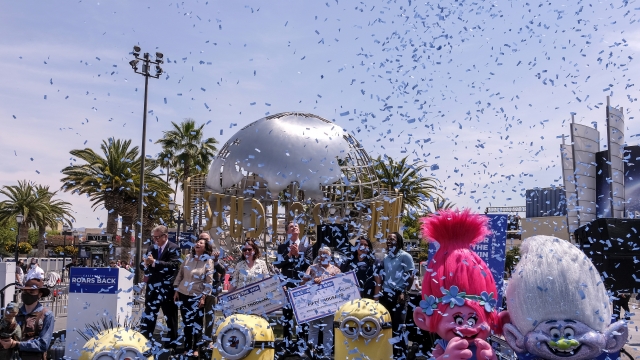 The most populous U.S. state has lifted its COVID restrictions.

June 15th is a big day here in California. Physical distancing, capacity limits and a county tier system have ended.

Over a year of restrictions.

"You had time to grow, time to spend with your family,"  Christina, from San Diego said.

”I got really bored of wearing a mask," Tamer from Oakland said.

There’s finally a break for the Golden State.

California, the first to shut down in March 2020, now 15 months ago...is among the last states to lift its COVID mandates. Masks are gone for fully vaccinated folks, but businesses can decide if they still want people to wear them.

"I'm very happy because after many months closed and after the hard times for the COVID, now I see that the light is coming,"Martha Medina, a merchant at Olverita's Village in San Francisco said.

Officials are hoping for a tourism boost...about half a million jobs in the state were lost during the height of the pandemic.

"Business was off 70 percent last year, though it has really affected the Wharf," Tom La Torre, Owner of Sabella & La Torre Restaurant says of Fisherman's Warf, a popular tourist spot in San Francisco.

Since mass vaccination sites began rolling out in early 2021, California has some of the lowest infection rates in the U.S. It once had the highest coronavirus community spread rates in the country -- showing what a difference vaccines are making.  Two-thirds of people 12 and up here have gotten at least one dose.

There are still neighborhoods with low vaccination rates. Wealthier areas and white communities are outpacing low-income and Black and Latino populations.  The state’s awarded more than $15 million in lotteries to try to drive those numbers up. Even with all that, some are still weary of the virus.

"I feel like I’m not ready" Adelle from Oakland told Newsy.

"Just this-this is what I feel comfortable with right now," a woman in San Diego said.

Some restrictions remain. Those unvaxed, still need a mask. Anyone on public transportation needs one too. Same with schools K-12, and some workplaces. Really, it's up to the business.

At the Oakland Zoo, they’re still requiring social distancing and masks in high traffic places inside and outside.

Many people Newsy spoke with are still confused by masking. Businesses can decide if they want to rely on the honor system or use a digital vaccination verification, set to roll out later this month.  Lindsey Theis, Newsy. San Francisco.