Some Democrats Want Details On Federal Spending At Trump Businesses 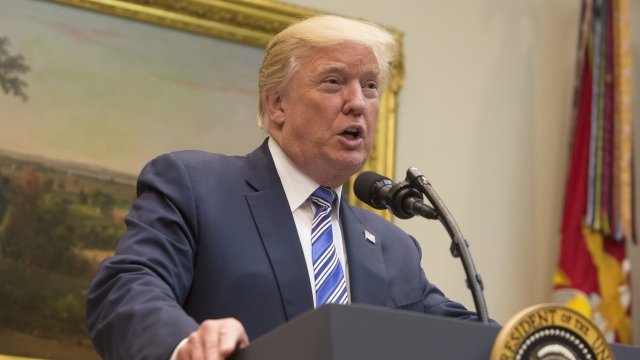 Democrats on the House oversight committee asked agencies to report federal spending at businesses owned by or affiliated with the Trump Organization.

Democrats on the House Committee on Oversight and Government Reform have one question: How much money is the federal government spending at President Donald Trump's privately owned businesses?

The Democratic committee members sent letters to all 15 Cabinet secretaries and leaders of eight other federal agencies to try to find out.

Each letter reads in part, "The President's financial entanglements make it impossible to know whether he is making his decisions in the public interest or to benefit him or his family members financially."

In the letters, committee members cite multiple examples of such federal spending uncovered by the press.

Those instances include the president's trips to his Mar-a-Lago resort in Florida, the State Department booking 19 rooms at the Trump hotel in Vancouver and Secret Service protection for Eric Trump while he was in Uruguay for business.

The committee members are requesting documents on any spending by a department or agency at "businesses owned by or affiliated with the Trump Organization."

The new president and his family are positioned to profit from policy they help create.

That request could be challenging since Trump's financial disclosure released in June reported he collects income from or has assets in more than 130 entities.

Trump turned management of the Trump Organization over to his eldest sons before taking office. But the president still retains ownership of his company and set up a revocable trust that allows him to withdraw money at any time.

The committee Democrats are giving the departments and agencies until Aug. 25 to deliver all relevant documents.