For homeless youth, sometimes finding a place to live isn't the answer 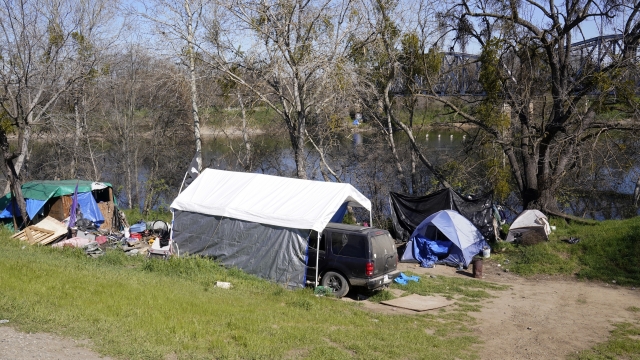 The goal of Street Youth Ministry, a non-profit, is not to find teenagers housing, because many of them just don't want that.

There was a time in Sadie Haas' life when she could never imagine she’d be living under a highway overpass on the north side of Austin, Texas. A tent with only a sleeping bag and a small bag of clothes are the only possessions she owns.

"This is my first time being homeless," Haas said, while sitting on top of an upside empty milk crate.

Through the honking of semi horns and the often deafening revving of engines from the highway above her, Haas slowly explained how she ended up here a few months ago. During a robbery in her home, she says, she was shot. Unable to work, she lost her job. Like so many Americans, she was one paycheck away from losing it all.

"Life knocked me down 10 notches lower," she said. "No one prepares you for that. There’s no schools for that."

Orphaned at an early age, she had no family to fall back on. Haas is among the nearly 4.2 million young people in this country who experience homelessness in a given year.

"No one is here to make sure things are gonna get better. No one holds your hand. You’re out on a limb by yourself," she said.

The days out here are long, and sometimes dangerous. The nights often feel even longer. But on the streets of Austin, Texas, if you listen close enough, you can hear a bit of hope coming from the basement of a church downtown, where Terry Cole greats a small handful of teenagers who trickle in.

"Hi, Uncle Terry! What’s up?" one of them exclaims.

Nonprofits And Public Health Groups Step Up Support For The Homeless

Amid the pandemic, social service and public health organizations are working to make sure homeless people don't fall through the cracks.

Cole has been helping this country’s youth homeless population in non-traditional ways. He’s the founder of Street Youth Ministry in Austin. The goal of this nonprofit is not to find teenagers housing, because many of them just don't want that. Instead, it’s to help them get over whatever hurdle they may be facing on any given day or night.

"Our product is guidance counseling because we want to help them change their lives when they’re ready," Cole said.

For Cole and the staff here, their main goal is to simply get homeless youth in the door. They run everything from a food pantry to a talent night in an effort to do that. During talent night on Wednesdays, homeless youth are encouraged to get up and perform. Some sing, others dance, and others might read a poem.

Sometimes young people just come here to put their feet up for an hour, and that’s okay with Terry Cole. His mission is to play the long game: whatever it takes to make that initial connection and get these kids in the door. Then over time, the goal is to work with them to maybe find a job or mental health services, or even just a new sleeping bag.

At the end of any day, for those who are homeless, Cole says sometimes all they need is to be given a chance — no matter their age.