The Science: COVID-19, School Masking And The Delta Variant 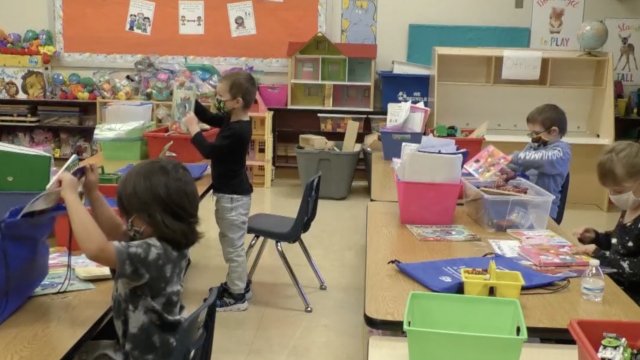 Without vaccines, scientists are still trying to find how to prevent COVID spreading in school.

We’re in this between time: where schools are setting policy for the upcoming year. Many are ditching mask mandates even though vaccines aren’t available for elementary school kids. For Mom Terrysa Armstrong, being careful is top of mind.

"My teenager is vaccinated but my children aren't, obviously. So, you know, what are they going to bring home to their grandparents or to me?" she said.

Both Pfizer and Moderna are wrapping late-phase clinical trials for their shots in kids 5 to 11 and plan to file for FDA emergency authorization by December. Johnson & Johnson says they have four pediatric studies planned this fall too. But nothing will be ready for the start of the school year.

"At the end of the day, children and staff and students need to feel safe," said Dr. Moira Inkelas, co-investigator with the UCLA Fielding School of Public Health.

Without vaccines, scientists are still trying to find how to prevent COVID  spreading in school.

Inkelas is helping lead California’s research for the National Institutes of Health. But some of that work will only look back on this year once it’s done. Over the next two years, the NIH will spend $33 million comparing how different school districts’s plans of masking and testing drove infections.

"This is all a human endeavor. And so we're trying to interpret the science, trying to help school districts think about what steps they can put into place. And then, of course, the pandemic is also changing day to day," Inkelas said.

Congresswoman Kim Schrier was a pediatrician before turning to politics. She’s been pushing for mass testing after seeing how successful it was in her own district in Washington state, but notes those programs come with a cost.

"The test that we have now available over the counter cost twelve dollars each. And there is no way that is practical to do on a once or twice or three times a week basis. That is just not financially doable," she said.

But some schools are already ditching the masks despite the fact the CDC hasn’t updated its guidance. It still recommends schools have universal masking.

Maryland Gov. Larry Hogan said kids shouldn’t have to wear masks or socially distance in schools this fall, because the state's virus positivity rates have dropped.

So are students and teachers at risk? Dr. Frank Esper with the Cleveland Clinic says right now, that depends where you live, and your school district’s plan.

"There's still going to be some risk. Even if you went to school and had masks and social distancing and everything, it's still not zero. But it's very reassuring that children, especially the smallest children, do not seem to spread this virus as readily as adults do," he said.

And for parents like Armstrong, making up for what was lost in last year’s virtual or hybrid learning, is crucial.

"My daughter, she's going into middle school and she got great grades just last year, but I know that she is behind," she said.