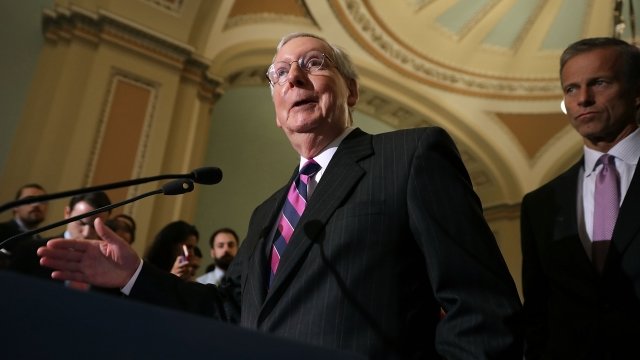 The tension between Senate Majority Leader Mitch McConnell and President Donald Trump is causing some Republicans to pick a side.

For some background: McConnell told a crowd in Kentucky on Monday that Trump was new to politics and that he had "excessive expectations about how quickly things happen in the democratic process."

The president responded Wednesday with three tweets criticizing McConnell for not following through on the Obamacare repeal effort and telling the majority leader to "get back to work."

Several senators came to McConnell's defense, while a few other Republicans echoed the president's complaints.

Republican senators from the right and the center, including John Cornyn, James Lankford and Susan Collins, tweeted support for McConnell and his leadership.

Sen. Lindsey Graham, along with a handful of party strategists, went the opposite direction.

They pointed out that the repeal effort had been a GOP rallying point long before Trump took office.

The split could complicate Trump's already difficult agenda of repealing Obamacare and passing tax reform, which is already up against do-or-die votes on the debt ceiling and a new budget once Congress gets back from its August recess.