Food And Housing Isn't A Given For All US College Students 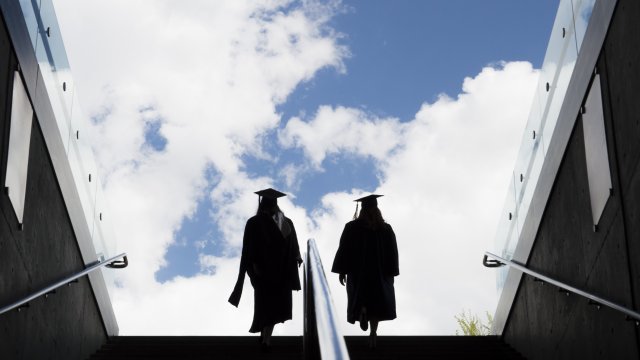 Researchers who released a new survey on students' access to basic necessities have some ideas for solutions, too.

For a number of college students in the U.S., homelessness and hunger are everyday concerns. Now, the largest survey of its kind is shedding light on how big these issues are.

About 36 percent of university students surveyed said they were food insecure. Food insecurity for this study meant students didn't know where their next meal was coming from — or if the food was nutritionally sound and safe to eat. Around 36 percent of students said they didn't have secure housing. About 9 percent were homeless.

For students attending community colleges, those percentages were even higher.

What Low-Income Students Pursuing STEM Fields Are Up Against

More colleges are focused on offering support and financial help to low-income students in STEM majors.

But before we break these stats down a bit more, keep in mind most of the students surveyed had jobs or were looking for one.

If we look at food and housing security and gender, researchers found female students were more likely to be food insecure than males. And nonbinary students were even more at risk.

Homelessness was especially an issue for Native American students and students who said their race was "mixed." The survey found financial aid wasn't always enough to prevent this.

And pressures like food and housing insecurity can cause students to work more, and thus get lower grades.

Trump Administration To Give $2 Billion To Fight Homelessness

But the administration also plans to make cuts to housing assistance programs.

So how do these findings from 2017 compare with 2016 and 2015? The researchers found the findings are "broadly similar" and show this is a public health issue.

But the survey offered some solutions, too. And the solutions show why homelessness and hunger are issues for college students in the first place.

Researchers also mentioned collecting data is important, as not all universities do on these issues. And that universities, lawmakers and partnerships with local organizations that offer resources can help alleviate the needs of these students.