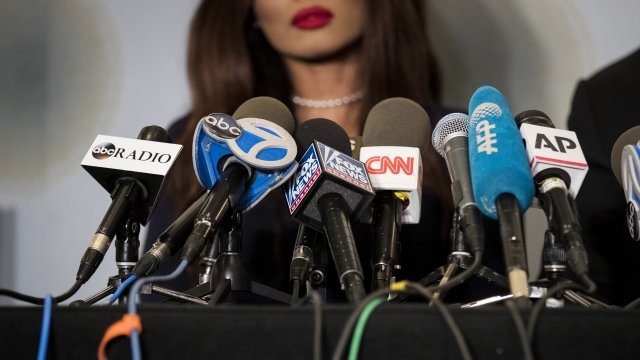 The #MeToo movement isn't just a spoke in the news cycle — it's made up of real traumatic incidents. Although the movement has been empowering for many women, others have also gotten caught in the controversy.

On Wednesday, veteran producer and Hollywood executive Jill Messick took her own life. Her family told The Hollywood Reporter she battled depression and bipolar disorder for many years but that those struggles were magnified when her name was tied to the media storm surrounding Harvey Weinstein and actress Rose McGowan.

In a statement, Messick's family wrote: "Over the past few months, many women have come out with allegations against Harvey Weinstein, including Rose McGowan, who has repeatedly spoken with the press, striking out against not only her alleged attacker, but a great many others. One of them was Jill."

Messick was McGowan's manager in 1997 — the year McGowan alleges Weinstein assaulted her. In an interview with The New York Times, the actress said she told Messick about the incident and that Messick comforted her.

McGowan later publicly insinuated in interviews and her upcoming book that her former manager didn't support her case against Weinstein.

In late January, Weinstein's lawyer released an email from Messick without her consent. Written before the scandal erupted, that email described her perspective of the 1997 incident, and Weinstein's team used it to discredit McGowan.

As the incident gained more coverage, Messick's name was brought up constantly, but she stayed silent. Messick's family says that's because, as a supporter of the #MeToo movement, she didn't want to undermine other survivors' stories about sexual misconduct.

Messick's story highlights a difficult aspect of #MeToo: the collateral damage to innocent and vulnerable bystanders.

It's unclear if more people report after high-profile sexual assault cases, but some say they can open up the discussion.

Professionally, people linked to men accused of sexual misconduct are often caught in the controversy. Comedian Tig Notaro, whose career was boosted by Louis C.K., said she felt "trapped" by her association. And having once lost a major TV opportunity over an actor accused of sexual misconduct, comedians Allison Raskin and Gaby Dunn wrote, "It's a bizarre, painful thing for your career to be the collateral damage of someone else's wrongful acts."

Before her death, Messick was in talks to work for a new entertainment company, but her family says the media coverage of the Weinstein-McGowan allegations devastated her.

Rampant coverage of sexual misconduct can also bring up traumatizing memories, especially for survivors of sexual assault. Many are already coping with post-traumatic stress disorder.

To deal with the headlines, a psychiatrist who specializes in trauma told Self Magazine, "It's good to remind yourself that you're in a safe place and that the memories, although they're scary, aren't dangerous." Experts also recommend therapy.

Beyond what survivors can do, news outlets do have a duty to expose abuse — but in a way that's responsible. Closing their statement, Messick's family wrote, "We must not forget one simple truth: Words have power."