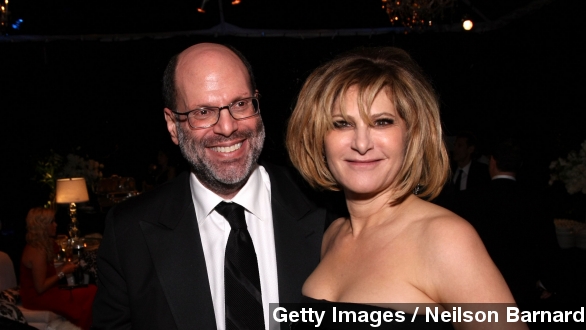 More embarrassment for Sony Pictures' Amy Pascal and prominent producer Scott Rudin. They're apologizing over offensive emails in which they discuss the POTUS himself — emails revealed as part of the massive hack on Sony.

"And most of us have spent a lot of time thinking about our favorite movies or TV shows, but we don't often think about the entire infrastructure and industry behind the scenes."

Rudin floats the idea of Pascal asking if POTUS would fund any movies — to which Pascal replies: "I doubt it. Should I ask him if he liked DJANGO?"

Yikes. Things go downhill from there as the two take turns guessing what movie starring an African-American is Obama's favorite.

Further guesses included "12 Years A Slave," "The Butler," "Think Like a Man" and Kevin Hart's "Ride Along." The jokes are both offensive and simplistic — we'd expect more high-brow humor from entertainment industry execs.

Both Pascal and Rudin have apologized for the exchange, with Pascal saying she accepted full responsibility for the inappropriate conversation. Rudin's apology said the emails "were meant only to be funny, but in the cold light of day, they are in fact thoughtless and insensitive."

BuzzFeed revealed the embarrassing emails and points out Pascal is actually a major contributor, having donated $5,000 to the president's re-election campaign and a little more than $30,000 to the Democratic National Committee.

But the revelation might add evidence to Chris Rock's recent claim in an op-ed for The Hollywood Reporter that Hollywood is "a white industry."

The leaked emails are only the latest in a huge file dump uploaded online by a group calling itself the Guardians of Peace. Also revealed were emails from Rudin to Pascal slamming actress Angelina Jolie.

This video includes images from Getty Images and an image from random letters / CC BY NC SA 2.0.