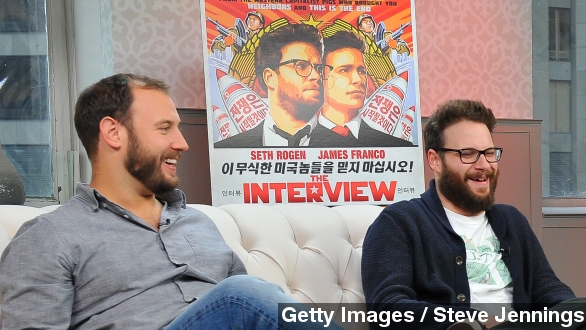 "The Interview" is getting some free publicity thanks to allegations North Korea was behind the attack on Sony Pictures.

The North Korean government has finally denied it had anything to do with the hack on Sony Pictures Entertainment.

Many had speculated the hack was motivated by the government's anger over Seth Rogen and James Franco's upcoming film "The Interview."

A North Korean government-controlled website called the film "an evil act of provocation" and said its makers deserve "stern punishment."

Those could be frightening statements to some, but if you're making a movie and banking on its controversial plot as the main selling point, then it could be the best endorsement you could hope for.

The movie's plot is already playing on the current tense relations between the U.S. and North Korea. So when headlines began cropping up that the cyberattack might have been retaliation for "The Interview," connecting the film's outrageous plot to reality, the appeal of the movie only grows. (Video via The Guardian)

Now North Korea is denying involvement in the hack. An anonymous official told Voice of America: "Linking the DPRK to the Sony hacking is another fabrication targeting the country. My country publicly declared that it would follow international norms banning hacking and piracy."

But that doesn't stop the story from acting as free publicity for Sony. Google Trends shows a spike in searches for "The Interview" when the story broke last week.

All this isn't to say Sony isn't hurting from the cyberattack.

Several of Sony's films were leaked to pirating sites, including Brad Pitt's "Fury" and the upcoming "Annie" remake, which hadn't even made it to theaters yet. Confidential information was also leaked, including the salaries of top executives and Social Security numbers of more than 3,500 employees.

But despite the damage, at least "The Interview" is catching a lot of attention ahead of release. The film hits theaters Christmas Day.

This video includes an image from Keith Martin / CC BY NC SA 2.0.