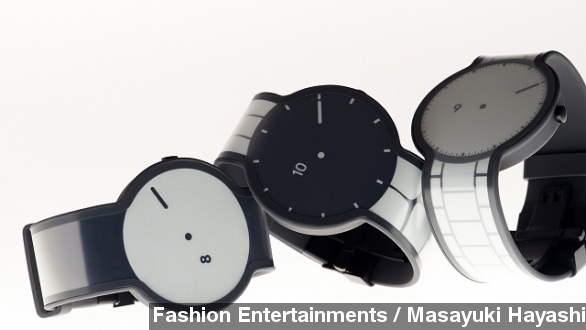 Sony's just been unmasked as the company behind the FES watch, which features an e-paper display set to various patterns.

Sony's latest wearable is all about form over function. The tech giant's just been outed as the source of a nifty e-paper watch design.

This is the FES watch, which first showed up on Japanese crowdfunding site Makuake a few months back. Its strap and screen are made from an electronic paper material which can display at least 24 different black-and-white patterns.

If you're not familiar with e-paper, it's a simple display technology, commonly used for e-readers, that mimics the appearance of ink on paper. E-paper displays use a lot less energy than a typical LCD screen and won't fade in direct sunlight — but it's not as good for showing complex, moving or colored images.

The FES watch supposedly came from a company called Fashion Entertainments, which also apparently has plans for using the technology in other patterned accessories. The watch itself doesn't do much more than tell time, but its distinctive look and the promise of weeks of battery life drew enough interest to raise around 3.5 million yen — over $30,000 — during its Makuake run.

And that might have been the end of the story, if rumors hadn't started to swirl that Sony was also developing a similar e-paper watch. The Wall Street Journal looked into it, and — well, turns out Fashion Entertainments isn't just another tech startup.

A Sony spokesman told the Journal Fashion Entertainments is actually a company-owned initiative overseen by Sony's smartphone head — part of the tech giant's effort to diversify its product lineup. Another rep for the project said the team "hid Sony's name because we wanted to test the real value of the product, whether there will be demand for our concept."

Sony, of course, already has a few smartwatch entries on the market, as well as a fitness band that used an e-paper display, but none of those products have really taken off. (Video via Android Authority)

And that might be why the FES watch is focusing more on form than features. Bloomberg points to a consumer survey which suggests bad aesthetics are a significant barrier for adoption.

One consultant told the outlet, "Smartwatches don't sell now because there is little reason to buy one, since your smartphone can do it all anyway. ... Many people choose their watches based on the brand and design. Convincing them to replace what's on their wrist now is no mean feat."

The company hasn't set a public release date for the FES watch, but backers of the project are scheduled to receive their watches in May 2015.