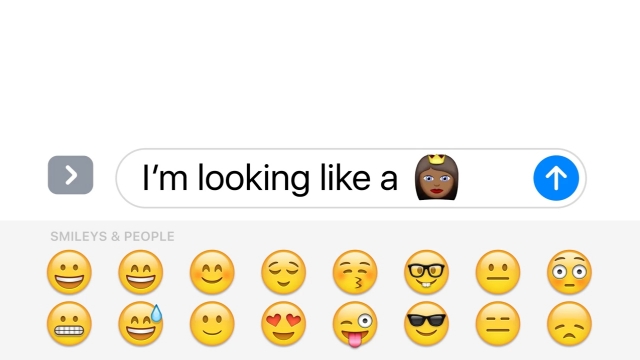 Updates to Apple's Messages app in iOS 10 include emoji predictions and ways to completely replace words.

And even though it is the main service for receiving texts on iPhones, it's also essentially a chat app. Which means it's competing with services like WhatsApp, Facebook Messenger, Slack, Google Hangouts and more.

Some of the iOS 10 updates, like emoji predictions and rich links, look similar to the competition. Other additions to the app are more creative, but they may not be totally necessary.

"Sometimes you've typed a whole message and you realize at the end that you're totally lacking in emojification. ... When you tap on the emoji button, we'll highlight all the emojifiable words there. And you can just tap, tap, tap, tap and emojify," Federighi said.

Something else not seen in other chat apps is bubble effects and invisible ink. With bubble effects, you'll be able to "say" a message softly or loudly and the chat bubble will convey the sentiment with a visual cue. Invisible ink will hide messages' content at first and then slowly melt away to reveal the text or media.

Messages will also let users send handwritten chats and draw on photos or videos, which feels like a page out of rival Snapchat's playbook, except Apple's iMessages will stick around much longer.

One last, pretty important update to Messages for iOS 10: The app will be ripe for third-party integration thanks to a new app drawer feature. This means developers of apps like Fandango, Square, JibJab and more will be able to make their apps easier to use within Messages.

In Federighi's demo, he showed how using Square in the app drawer would allow iMessage users to send money through the app, kind of like how Facebook or even Paypal lets people send money.

This video includes clips from Apple.