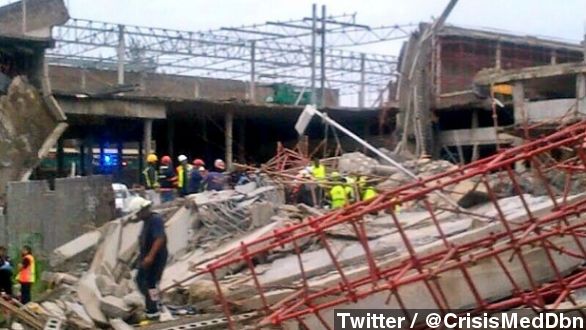 Rescue crews continue to work to free people trapped by a collapsed roof at a construction site in eastern South Africa.

Rescue crews continue to work to free people trapped after a roof collapsed at a construction site in eastern South Africa.

“Rescue teams are at the site in the area of Tongaat in the city of Durban. The shopping mall was under construction when the accident happened. The regional fire service says those trapped were workmen.”​ (Via Al Jazeera)

“You can see this is a large concrete structure. Reports are that 50 people (FLASH) may be trapped under all of this rubble. No word yet on what caused this collapse.” ​(Via Fox News)

CNN reports at least two people have died and 30 people have been transported to the hospital with moderate to critical injuries. A crisis medical operations director said the cause is unknown but there was “a large amount of scaffolding and cement foundation that collapsed on to some of the construction workers.”

The Daily Mirror posted this cell phone footage of the incident showing the collapsed building and crowds of people along the side. (Via Daily Mirror, YouTube)

Those on scene say rescue efforts have become increasingly difficult the darker it gets outside. (Via BBC)