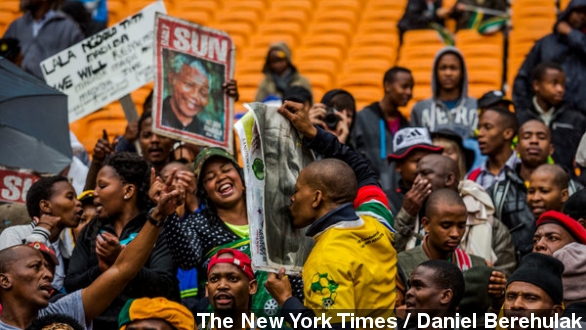 Nearly 100 world leaders joined the tens of thousands of South Africa gathered to celebrate the life of Nelson Mandela.

Tens of thousands of South Africans Tuesday gave their final goodbye to Nelson Mandela. (Via The Guardian)

"Our nation has lost its greatest son." (Via KTN)

Free trains and buses brought the mourners to the stadium in Johannesburg. (Via Sky News)

The large crowds are still singing together, dancing together. They're wearingt he colors of South africa, carrying the flag. (Via CNN)

They were joined by more than 90 world leaders and foreign dignitaries at a memorial service and state funeral. Among them, former presidents George W. Bush, Bill Clinton and Jimmy Carter. President Obama called him the last great liberator of the 20th century. (Via The Washington Post)

OBAMA: “It’s tempting, I think, to remember Nelson Mandela as an icon. But Mabiba strongly resisted such a lifeless portrait." (Via NBC)

The mourners remembered Mandela as one of the greatest leaders of our time. Here's U.N. Secretary General Ban-ki Moon:

“This stadium holds around tens of thousands of people. Buteven an arena as big as the African continent could not contain our pain today.” (Via BBC)

The public will be able to view Mandela's body for three days in Pretoria before a burial Sunday in his childhood village. (Via PBS)