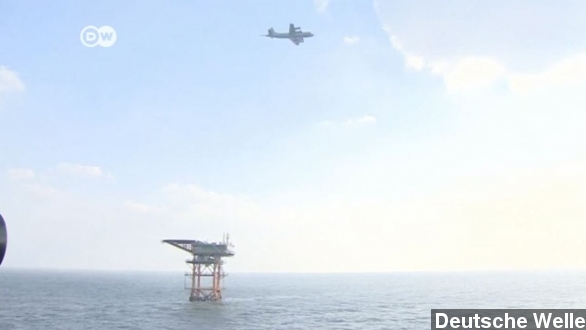 South Korea is responding to China's recent air-zone grab by making a similar move in the South China Sea.

South Korea is the latest country to make a grab for airspace in the South China Sea as tensions continue to rise over a similar move by China.

Just two weeks ago, Beijing established an air defense identification zone over islands territorially disputed with Japan. The U.S., Japan, South Korea and even Australia have protested the move. (Via Euronews)

South Korea is primarily interested in a maritime science research station over an underwater reef called Leodo. Similar to the Japanese islands, China says it controls the reef. (Via The Guardian)

But South Korea doesn't appear to be backing away. The defense ministry said Sunday the country would expand its own air defense zone to cover two territorial islands as well as the reef, saying:

"We have explained our position to related countries and overall they are in agreement that this move complies with international regulations and is not an excessive measure." (Via Deutsche Welle, Fox News)

Although air defense identification zones are not technically territorial claims, they allow countries to monitor the airspace they consider their own.

China requires planes flying in its zone to share their flight plans. The U.S. responded by sending bombers to fly in the airspace. Then China sent its own war planes to patrol the zone. (Via Voice of America)

"The United States has a profound stake in what happens here. ... That means taking steps to reduce the risk of accidental conflict and miscalculation." (Via The White House)

The U.S. has spoken out in support of South Korea's countermove, saying it would avoid confusion or potential threats to civilian airlines. (Via International Business Times)

A spokesman for the Chinese Foreign Ministry said any move by South Korea must be in accordance with international law. He also said China is still open to communications with the country. (Via BBC)

The new South Korean airzone is set to go into effect Dec. 15.