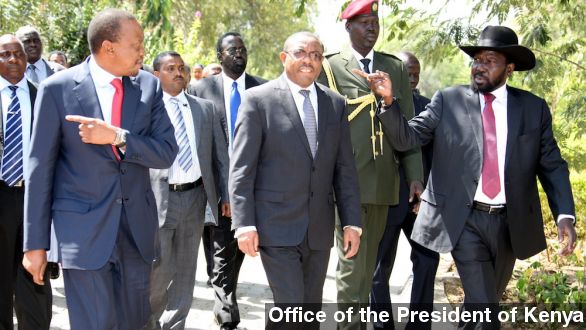 South Sudan's government announced Friday it would be willing to accept a cease-fire from the rebel group it is currently fighting.

Office of the President of Kenya

After almost two weeks of widespread violence in the world's youngest country, the government of South Sudan has indicated Friday it might be willing to accept a cease-fire.

"We are committed to peace, and for that matter, we have accepted the cessation of hostilities, if it will not be exploited." (Via Al Jazeera)

The announcement came after South Sudan's President Salva Kiir met with several regional leaders in Nairobi, Kenya, during a special summit to discuss the worsening conflict between the president and his former Vice President Riek Machar. (Via South Sudan TV)

Kiir's government says loyal soldiers foiled an attempted coup by Machar on Dec. 15. Fighting broke out in South Sudan's capital city, Juba, and has rapidly spread throughout the country. (Via ENCA)

The U.N. estimates more than 1,000 people have been killed in the violence so far, and more than 120,000 have been displaced. International observers feared the conflict could spiral out of control into an ethnic civil war. (Via CNN)

However, President Kiir now has several advantages on his side, and this might encourage him to extend the olive branch.

First is the support of South Sudan's neighboring countries, which pledged Friday not to accept any bid to overthrow Kiir. Those countries gave South Sudan four days to resolve the conflict before taking action, pressuring Machar to accept the cease-fire. (Via BBC)

Kiir has also received a recent military boost after government troops defeated insurgent forces in the key cities of Bor and Malakal. (Via allAfrica)

Machar's camp has yet to respond to the government's cease-fire offer. In the past the rebels have said talks can only begin if the government releases 11 politicians arrested for their alleged roles in a coup plot.