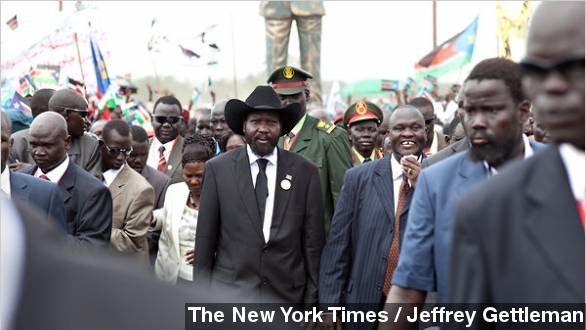 South Sudan's president characterized infighting among rival soldiers in the capital city as an attempt to overthrow his government.

Disgruntled soldiers in South Sudan have tried and failed to overthrow the government of the world’s youngest country.

That’s according to its president: “The government is doing all it can to make sure citizens are secure and safe.” (Via BBC)

South Sudan's president, Salva Kiir, seen there at a press conference Monday, says he’s now firmly in control of the situation on the ground, and has imposed an evening curfew for civilians. (Via NTV Uganda)

This, after heavy gunfire and explosions rang out overnight in the capital city of Juba coming from rival factions of soldiers. (Via Google)

The United Nations says several were wounded in the attack, and hundreds of others have sought shelter inside its refugee camps following the clashes. (Via Gurtong Trust)

You’ve probably heard about the genocide in Darfur, and the decades of conflict in Sudan that led to the eventual split between Sudan and South Sudan two years ago. But less reported has been the political tension within South Sudan.

This summer, Kiir sacked Machar, along with his entire cabinet in what was seen as a power struggle. (Via Wikimedia Commons / Stein Ove Korneliussen)

​At the time, Simon Tisdall at The Guardian noted Kiir’s popularity had suffered and warned "the collapse of the government raised the prospect of escalating violence."

It’s still unclear exactly what sparked this recent outbreak of violence, but The Sudan Tribune reports it may have broken out after President Kiir ordered the army’s chief of staff arrest disloyal politicians.

Several global airliners Monday canceled flights into the country, and the U.S. embassy has temporarily closed its doors amid the fighting.