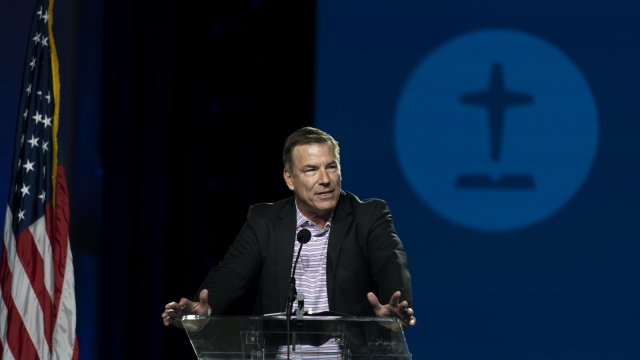 The vote on sex-abuse reforms fell short of what some survivors of abuse in Southern Baptist churches sought.

The Southern Baptist Convention voted overwhelmingly Tuesday to create a way to track pastors and other church workers credibly accused of sex abuse and launch a new task force to oversee further reforms in the nation's largest Protestant denomination.

The vote came three weeks after the release of a blockbuster report by an outside consultant on the long-simmering scandal, revealing that Southern Baptist leaders mishandled abuse cases and stonewalled victims for years.

Thousands of Southern Baptists are here in Anaheim for their big national meeting.

They elected a new SBC president, Texas pastor Bart Barber, who is a staunch proponent of Southern Baptists' conservative views but who says he has a track record of dialogue with those who disagree.

He has called for an "army of peacemakers" amid bitter political battles in the nation's largest Protestant denomination.

He defeated three other candidates and ultimately prevailed in a run-off vote at the SBC's national meeting in Anaheim. His closest rival, Tom Ascol, had complained of too much "wokeness" in the denomination and sought to move it further to the right.

Also Tuesday, the delegates debated but didn't vote on whether to kick out one of its biggest and best-known churches — Saddleback Church, the California megachurch headed by Rick Warren, author of the blockbuster bestseller "The Purpose Driven Life" — because it ordained women pastors. The denomination's statement of faith says the office of pastor is for men only.

Warren himself spoke briefly late in the day, alluding indirectly to the controversy by saying Baptists should unite on ambitious missionary goals.

The vote on sex-abuse reforms fell short of what some survivors of abuse in Southern Baptist churches sought, such as a compensation fund for victims and a more robust and independent commission to monitor its churches' handling — and mishandling— of abuse. And it also met opposition from some who contended the crisis was overhyped and that it interfered with Baptist churches' independence.

But Bruce Frank, who led the task force that recommended the reforms, made an emotional plea for church representatives to accept them as their two-day annual gathering got underway. He called the steps the "bare minimum," adding it will take time to change the SBC's culture.

He challenged those who would say these steps interfere with Baptists' focus on missions, saying that "protecting the sheep from the wolves" is essential to mission.

"How are you going to tell a watching world that Jesus died for them ... when his church won't even do its very best to protect them?" Frank asked.

He acknowledged the high cost of executing these recommendations. "But it's not going to cost nearly as much as survivors have paid," he added.

Abuse survivors Tiffany Thigpen and Jules Woodson, shedding tears, said they were overwhelmed to see the messengers' hands go up in support of the task force's recommendations. "It's not perfect, but a small step and a healthy, healing step in the right direction," Woodson said.

But Christa Brown, who has advocated for more than a decade on behalf of fellow survivors of abuse in Southern Baptist settings, called the reforms disappointing. She and other survivors had sought a permanent commission to oversee compliance, whereas Tuesday's vote created a one-year term for a task force, with option to renew. She also called for a more "survivor-centric" handling of the list of accused clergy.

"I know people like happy endings, but I'm not feeling it," Brown tweeted afterward. "... I feel grief. It's better than nothing but that's such a low bar."

During debate, some members opposed even the reforms that were proposed. They noted that the consulting firm that conducted the report, Guidepost Solutions, tweeted in support of Pride month, which goes against the SBC's view that homosexuality is sinful.

"We have a group that celebrates sexual sin, advising us on how to handle sexual sin of abuse," said Indiana pastor Tim Overton. "That is a problem."

Frank replied that he didn't like the Guidepost tweet, either: "The issue is not, what does Guidepost think of LGBT? The issue is what do Southern Baptists think of sexual abuse."

The Guidepost report, focused on how the denomination's Executive Committee handled abuse cases, also revealed that it had secretly maintained a list of clergy and other church workers accused of abuse, even after long claiming it couldn't do so without violating congregations' autonomy. The committee later apologized and released the list, which had hundreds of accused workers on it.

Frank said a database has been discussed by the SBC for more than a decade, adding it is crucial to ensure abusers are not going from church to church, hurting more vulnerable people.

Brad Eubank, senior pastor of First Baptist Church in Petal, Mississippi, urged messengers to approve the recommendations. Eubank, who is included in the Guidepost report, was sexually abused as a child by a minister of music at a Southern Baptist church in Mississippi.

"As a pastor I've talked to countless survivors and victims," he said. "This is not everything that needs to be done, but it's a starting spot."

The Saddleback debate, which has simmered for a year, followed its ordination of three women pastors in 2021 and the recent announcement that the retiring Warren would be succeeded as lead pastor later this year by Andy Wood. His wife, Stacie Wood, would become teaching pastor.

The SBC's Credentials Committee initially recommended having another panel study how to interpret the denomination's doctrine on who can serve as a pastor. After pushback, the committee ultimately decided Tuesday to further study the matter itself. Most Southern Baptists agree senior pastors must be men, but disagree if the ban applies to other ministry roles, it said.

Saddleback has long been seen as a model for the Southern Baptist ideals of church growth and evangelism, growing from a small start-up in 1980 to drawing more than 24,000 per week across multiple campuses as of 2019, according to Baptist Press.

Later in the day, Warren delivered an emotional address. He is set to retire after more than four decades of leading Saddleback Church.

"It's customary for a guy who is about to be hung to say his dying words," he said as the large gathering exploded into laughter. But Warren insisted he was not there to mount a defense, but to point out that the "gift of pastoring is different from the office of pastoring."

He profusely thanked the SBC for allowing him an opportunity to build a church that includes to multiple campuses and thousands of home Bible studies across Southern California.

"Southern Baptists taught me how to honor and love the local church," he said as his voice cracked. "I owe you all so much."