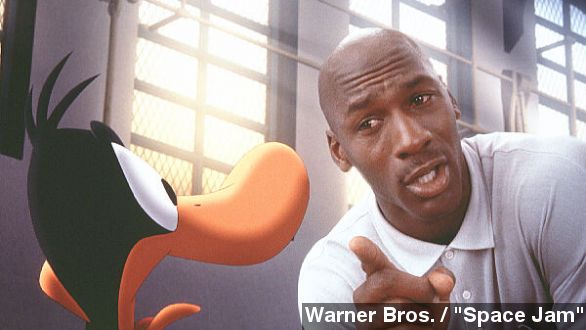 Beloved '90s classic Space Jam is rumored to be in development with LeBron James taking on Michael Jordan's role this time around.

After 18 years, rumors have begun circulating that there could be a... Space Jam 2? Wait, are you serious? Have you guys heard about this?

Reports are swirling around the Internet that the renowned '90s classic is getting a sequel. According to Deadline Hollywood, Warner Bros. has broadcast veteran Dick Ebersol's sons Charlie and Willie working on a screenplay for the toon flick.

The last time we visited Tune Land, Michael Jordan was the one helping the cartoon characters keep their freedom. This time around? Possibly LeBron James. (Via Warner Bros. / "Space Jam")

Word is that Charlie and Willie are writing the screenplay specifically for the the Miami Heat superstar. But King James himself seems unaware of the project. (Via USA Today)

In an interview with the Sun Sentinel, James said "It's news to me. I haven't head anything about it. Like I said, I've always loved Space Jam. It was one of my favorite movies growing up. If I have the opportunity, it will be great."

Of course, Michael Jordan wasn't exactly aware he was going to get dragged down to Tune Land to square off against the Monstars either.

And a tweet from Brian Windhorst of ESPN threw cold water on any hopes of a Space Jam sequel, LeBron or not, saying: "Well it was fun while it lasted. LeBron sources refute Deadline report, there's no Space Jam 2 or Warner Bros. project in works".

But a writer for IGN is still clinging to the dream, saying: "it's worth noting that no one from Warner Bros. is denying anything and Deadline is a trusted source when it comes to Hollywood scoops."

So is a Space Jam 2 sequel happening? Well, it appears that its still up in the air for now, but we can keep our fingers crossed.