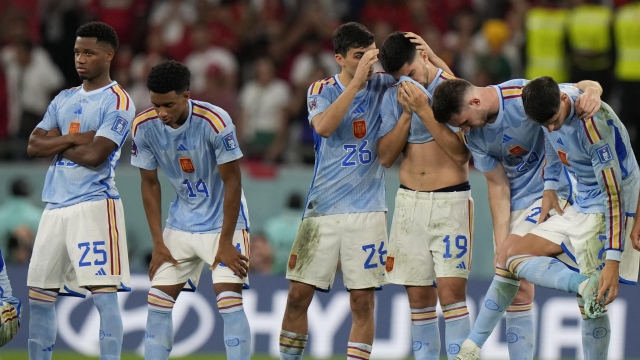 Spain controlled the game Tuesday but struggled to get past the well-organized Moroccans, who ultimately prevailed in a shootout.

Spain lost to Morocco 3-0 in a penalty shootout in the round of 16 at the World Cup on Tuesday, failing to make it to the quarterfinals for the third straight time since winning its last world title in South Africa in 2010.

La Roja also lost in a shootout in the last 16 four years ago, and it was also on penalties that it was eliminated in the semifinals of the European Championship last year.

There were high hopes for Spain ahead of the World Cup after it did well at Euro 2020 and at the Nations League, where it lost in the final to France.

The expectations became even higher after a resounding 7-0 rout of Costa Rica in its opener in Qatar, when Spain’s young squad successfully brought back the “tiki-taka” ball-possession style that had led La Roja to triumphs in the past.

The win sets up a must-see match between England and France in the FIFA World Cup quarterfinals in Qatar.

But Spain’s run in a major tournament ended in disappointment again after it struggled to translate its ball possession into goals. After the big win against Costa Rica, Spain played well against Germany but was held 1-1 after conceding a late equalizer. It then lost 2-1 to Japan when it needed a draw to win its group.

By finishing second, Spain apparently had fallen into an easier path by avoiding an encounter with 2018 runner-up Croatia in the round of 16, as well as possible matchups with Brazil and Argentina later on. Instead, it faced Morocco, which was one of the surprises of the tournament but had never made it to the last eight at a World Cup.

Spain controlled the game Tuesday but struggled to get past the well-organized Moroccans, who ultimately prevailed in the shootout after Pablo Sarabia's penalty kick hit the post and Carlos Soler and Sergio Busquets had their attempts saved by goalkeeper Yassine Bounou.

“It’s my responsibility,” said Spain coach Luis Enrique, who had asked his players to practice 1,000 penalty kicks while with their clubs. “I picked the first three penalty-takers.”

Spain’s only win in five penalty shootout attempts at a World Cup came against Ireland in the round of 16 in 2002. It was eliminated by co-host South Korea on penalties in the quarterfinals of that tournament.

Spain has won only three of its last 11 World Cup games since 2010.

Busquets, the only remaining member of Spain’s World Cup-winning team, is likely to end his career with the national team, although he hasn't yet officially announced his decision.

“Now the important thing is the team and not me,” said the 34-year-old Barcelona midfielder, who made his 17th World Cup appearance Tuesday to tie goalkeeper Iker Casillas and defender Sergio Ramos for the most matches with Spain in the tournament.

The future also was uncertain for other veterans in the squad, including Jordi Alba and César Azpilicueta.

Luis Enrique said one of his regrets in Qatar was not to have used 30-year-old Sarabia more often during the tournament.

The last time the men's team advanced past the knockout round – was when Team USA beat Mexico – way back in 2002.

Sarabia came on as a substitute just before the end of extra time "and he created two scoring occasions right away," Luis Enrique said. "It was my mistake not to have used him more. It wasn't fair.”

Luis Enrique did not say whether he would continue as Spain coach, saying he would “take some time to rest” before start making a decision about his future along with the Spanish soccer federation.

Spain's outlook is still bright as it brought to Qatar a talented squad that was the third youngest in the tournament. Among the starters were 18-year-old Gavi and 20-year-old Pedri, who both played well despite the team’s elimination. Gavi scored in the opener to become the youngest World Cup scorer since Pelé in 1958.

The other youngsters who will likely be regulars with Spain include Ansu Fati, Alejandro Balde, Yéremy Pino, Ferran Torres, Eric García and Nico Williams.

Spain is not expected to play again until qualifying for Euro 2024 in March, when La Roja faces Norway, Scotland, Georgia and Cyprus.

Despite the World Cup disappointment, Spain's young squad should be favored to qualify from its group and again be among the contenders in 2024, when it will continue its quest to win its first major title since Euro 2012.

"We’ll pick ourselves up and use it as a learning experience,” Busquets said. “We’re in a good dynamic, with young people. This is going to make them stronger.”