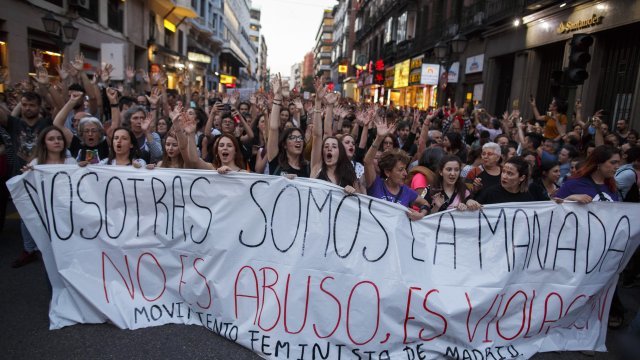 Thousands are protesting in the streets of Spain following a ruling that acquitted five men of raping a woman during a bull-running festival.

In 2016, five men, who called themselves the "Wolf Pack," had sex with an 18-year-old who appeared "passive" in videos of the incident, according to police. The men filmed the event, stole the woman's phone and bragged about it on What's App. They were facing 25 years but received nine for sexual abuse, a lesser charge than rape under Spanish law.

The decision sparked a massive protest Thursday from those who believe the sentence wasn't harsh enough, want more accountability and call the ruling "patriarchal justice." Some have compared the response to the #MeToo movement in the U.S., with supporters often using the phrase "Yo te creo" or "I believe you."

The survivor plans to appeal the verdict. The men include a former police officer and former solider.