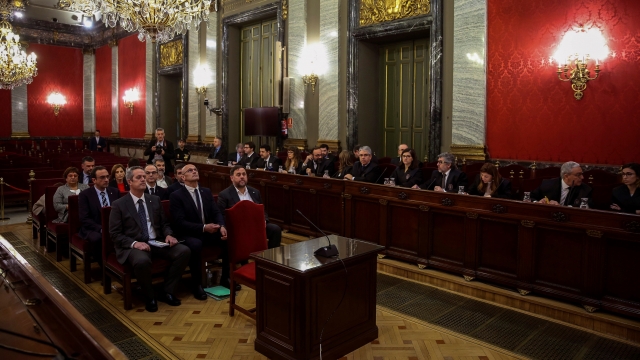 Spain's Supreme Court handed down the sentences Monday after finding the former leaders guilty of sedition.

Nine Catalan separatist leaders will spend between nine and 13 years behind bars for their roles in staging an independence referendum back in 2017.

Spain's Supreme Court handed down the sentences Monday after finding the former leaders guilty of sedition. Three other defendants were fined and banned from public office for 20 months for disobedience.

All 12 avoided the biggest charge — rebellion. Prosecutors were originally seeking 25-year jail terms for that offense.

The separatists organized the referendum in October 2017. Spain deemed it illegal, but the Catalan regional government went ahead with it anyway. The vast majority of voters said they were in favor of breaking from Spain, and the regional parliament declared Catalonia's independence.

After Monday's ruling was announced to the public, protesters flooded the streets in Barcelona and other parts of Catalonia. It comes less than a month before Spain is scheduled to hold its fourth election in four years.