Spanish Lottery Gives Out $3B Just In Time For Christmas 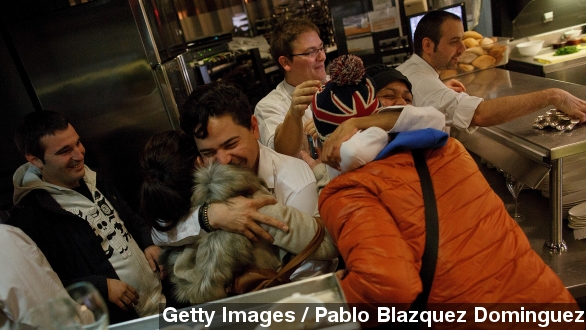 Spain's Christmas lottery is giving out around $3 billion in prizes this year, including 10 "El Gordo" prizes of $480,000 each.

About $3 billion is up for grabs in Spain's Christmas lottery this year.

With the winning lottery numbers announced Monday, many Spaniards are checking their tickets to see if they've just gotten a little richer.

"It's tradition that children sing the winning numbers on live TV. And during today's drawing, one of the girls started crying. ... Can you imagine the pressure with nearly $3 billion at stake?" ABC anchor Paula Faris said.

Unlike other lotteries, this one doesn't award the big sum to just one person.

Instead, the money is divided up so multiple participants can win. The BBC reports that 10 fourth-place prizes have already been drawn. Those are worth $20,000 each.

Ten of these "El Gordo" prizes are awarded. Three of those winning tickets have already been located.

One of the big winners is a group of restaurant workers in Spain.

Spain's Christmas lottery is the second-oldest lottery in the world, according to The Local. It first started in 1812, making it 202 years old.

The oldest lottery in the world is considered to be the Dutch National Lottery, which was first held back in 1726.

And, according to Fox News, Spain's lottery holds another impressive title.

"And $3 billion — that's how much Spain is giving out in the world's biggest lottery payday ever."

But what makes Spain's lottery so special is that there's a 1 in 6 chance of winning a prize. And then there's the fact that oftentimes most of the big winners come from the same towns.

That's because local shops sell lottery tickets with predetermined numbers, unlike in the U.S. where you get to choose your numbers. (Video via CBS)

In past years, entire towns have won the "El Gordo" prize, causing streets to be flooded with celebrations.