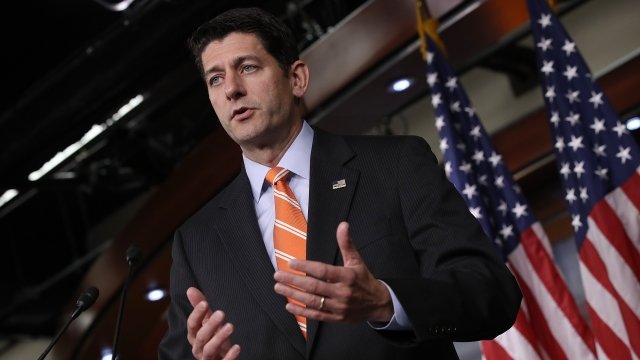 The dress code, which has been in place for years, has been the subject of criticism and greater scrutiny this past week.

"We will be working with the sergeant-at-arms to ensure the enforcement of appropriate business attire is updated," Ryan said.

First of all, yes, there is a dress code. Women aren't supposed to wear open-toe shoes or sleeveless dresses or tops. Men should wear a jacket and tie.

The code is enforced in the House chamber and a corridor just off the chamber called the Speaker's Lobby.

Ryan's announcement about modernizing it might seem out of place given the other topics he was discussing. But the dress code has faced quite a bit of scrutiny recently after a CBS News report.

The story said "a young, female reporter" wasn't allowed into the Speaker's Lobby because she was wearing a sleeveless dress. And it stated she wasn't the first journalist to have the dress code enforced.

The story caught the attention of a lot of people, including one of Ryan's colleagues.

"Before I yield back, I want to point out I am standing here in my professional attire which happens to be a sleeveless dress and open-toed shoes," Republican Rep. Martha McSally said on the House floor Wednesday.

Ryan was criticized for the code, but it's been in place since well before he became speaker. It's the same dress code observed under former Speaker Nancy Pelosi.

After Ryan's announcement, Pelosi tweeted: "Glad to see @SpeakerRyan is updating the dress code for the House Floor. These unwritten rules are in desperate need of updates."

During his briefing on Thursday, Ryan said: "Decorum is important, especially for this institution. And a dress code in the chamber, in the lobby, makes sense. But we also don't need to bar otherwise accepted contemporary business attire. So look for a change on that soon."