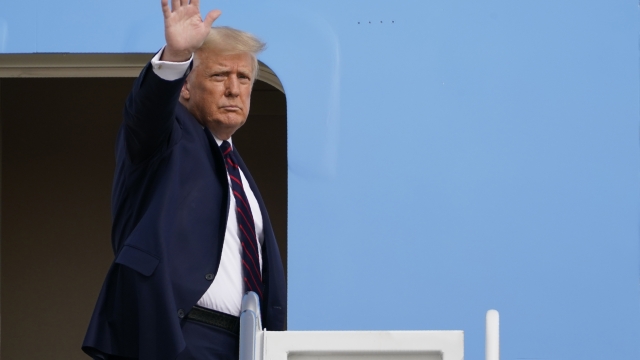 Experts think the weapon the president described to Bob Woodward may be a modified nuclear warhead, a hypersonic missile, or simply an exaggeration.

“I have built a nuclear — a weapons system that nobody’s ever had in this country before,” said President Trump.

In Bob Woodard’s recordings with President Trump, this remark caught the attention of the national security community.

Trump boasted of a new weapons system in December, and Woodward says he confirmed the system -- but what exactly was the president referring to?

"It's always hard to figure out exactly what he's talking about," says Ian Williams, deputy director of the Missile Defense Project at the Center for Strategic & International Studies.

Many scientists say the president was likely alluding to the W76-2, a nuclear warhead on a submarine, modified to release less energy than its predecessor -- making a smaller explosion with less collateral damage.

"The United States has never possessed before a tactical nuclear warhead on board a submarine launched ballistic missile. ... If there's a military airbase outside of a city, you could theoretically use that weapon against that target without affecting or too much affecting the civilians in the city," Williams says.

The W76-2 was first described by the Trump administration in 2018, essentially as a way to deter Russia. It was  deployed secretly from the waters of Georgia on a patrol at the end of 2019, around the time the president spoke with Woodward. But a scientist who first disclosed the deployment of the nuclear weapon remains skeptical.

"It's not like this thing can do something fundamentally different than the others can, except explode with less yield. So I'm not sure that necessarily fits the description," says Hans Kristensen, director of the Nuclear Information Project at the Federation of American Scientists.

Some scientists believe the president may have been referring to hypersonic missiles, which can travel at five times the speed of sound.

"We have, I call it the super duper missile. And I heard the other night, 17 times faster than what they have right now," Trump said in May.

"So he likes this sort of, you know, super duper things and stuff that is impressive and whatever. But, it's much harder to, you know, sort of take his word and read closely into the sentences," Kristensen says.

Neither the White House nor Woodward immediately responded to a request for comment. But the Defense Department tells Newsy hypersonics are a modernization priority: “We are focused on tactical, conventional air-, land- and sea-based hypersonic systems... We plan to field hypersonics systems in the early- to mid-2020s starting in 2023.”

Asked recently to clarify remarks to Woodward, as his book Rage hits newsstands, the president chose to keep it vague:

"I would say that he probably hasn't disclosed anything, and [if] anything, he has made allies as well as adversaries even more confused," Kristensen says.