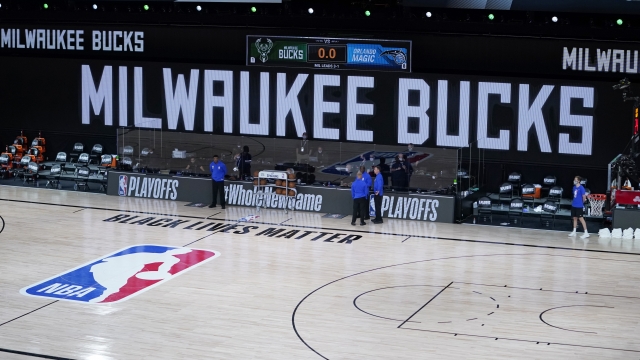 Former NBA Star Chris Webber tells striking players "you are starting something for the next generation."

The movement to address racial inequality is getting another assist from the sports world.

NBA players are now agreeing to take the court again after a strike, led by the Milwaukee Bucks, sidelined the sport. No entertainment - without racial justice.

“Despite the overwhelming plea for change, there has been no action, so our focus today cannot be on basketball,” said Milwaukee Bucks player Sterling Brown.

Athletes across multiple sports had refused to play to draw attention to this issue. The WNBA's Washington Mystics...wearing shirts with figurative bullet holes in reference to the police shooting of Jacob Blake in Wisconsin.

Other professional athletes joined in the strike. Los Angeles Dodgers pitcher Clayton Kershaw said he agreed that refusing to play was “something tangible we can do to help our Black brothers on this team.”

And tennis star Naomi Osaka pulled out of a major tournament, declaring: "As a black woman I feel as though there are much more important matters at hand that need immediate attention, rather than watching me play tennis."

The historic refusals to play were only part of a story, accompanied by perspectives from well-known sports figures.

“I have young nephews I've had to talk to about death before they've even seen it in a movie."

TNT broadcaster Chris Webber was one of a number of basketball figures to speak on racial inequality...and drive the conversation forward.

President Trump condemned the NBA Thursday for being too political.

"I don't know too much about the protests, but I know their ratings have been bad, and that's too, that's unfortunate," President Trump said. They've become like a political organization, and that's not a good thing.”

The NBA and WNBA have used their respective bubbles to promote social causes. You can't miss the signs. It's given players and coaches a platform to underscore the emotional currents black communities face.

"All you hear (from) Donald Trump and all of 'em talking about fear. We're the ones getting killed," said Los Angeles Clippers coach Doc Rivers. "It's amazing why we keep loving this country and this country does not love us back."

The NBA players strike is expected to end. But they hope, as playoff games continue, so too can the conversation about racial justice.