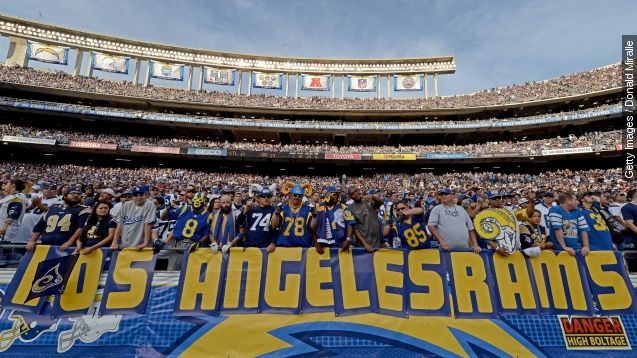 On Tuesday, the NFL voted to relocate the St. Louis Rams to the Los Angeles area, planning to build a stadium in Inglewood, California.

NFL owners have voted to relocate the St. Louis Rams to the Los Angeles area and gave the San Diego Chargers an option to join them.

NFL owners met in Houston to discuss and vote on the move. The Rams are headed to Inglewood, California, where owner Stan Kroenke has land ready for a stadium.

The Raiders and Chargers originally presented owners with a plan to move to Carson, California. But St. Louis was the only city out of the three to provide stadium plans and funding.

In a relocation application to the NFL, Kroenke called St. Louis a two-sport city, referring to baseball and hockey.

The relocation required a two-thirds majority of 24 owners to become official and got 30 votes.

The Rams and Chargers could begin playing in Los Angeles as early as next season, though the Inglewood stadium may not be ready until 2019.

This video includes images from Getty Images and MANICA Architecture.