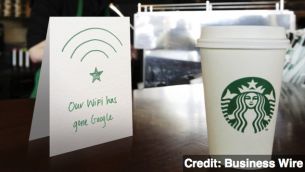 The coffee-shop franchise is ditching longtime Wi-Fi provider AT&T and switching to a new face in the broadband business: Google.

Et tu, Starbucks? The coffee shop franchise is ditching its longtime WiFi provider AT&T and switching to a new face in the broadband business: Google.

Google is planning to roll out free WiFi to 7,000 official Starbucks stores over the next 18 months. On its official blog, Google promises Starbucks customers will soon “be able to surf the web at speeds up to 10x faster than before.”

A Starbucks representative praised the partnership as an investment in the store experience.

“We do hope this is one step amongst many that we can continue to build upon what's already a great partnership with Google. … This increased bandwidth will match what consumers are doing on the Web today, whether downloading or streaming or both.” (Via CNET)

But it’s still not clear why Starbucks made the switch — AT&T claims its latest proposal to Starbucks was perfectly capable of matching Google’s WiFi speeds.

According to SlashGear, AT&T execs brushed off the apparent slight Wednesday, saying “Starbucks continues to be an important customer for AT&T.” (Via SlashGear)

9to5Google points out the Starbucks partnership is Google’s latest foray into the internet service provider market.

“Earlier this month Google paid $600k to provide 31 San Francisco parks and outdoor spaces with free WiFi for two years. … Perhaps Google sold Starbucks on the fact that many of its locations would soon benefit from its the up to 100x faster Fiber networks.”

Google WiFi at Starbucks could be coming as soon as August.