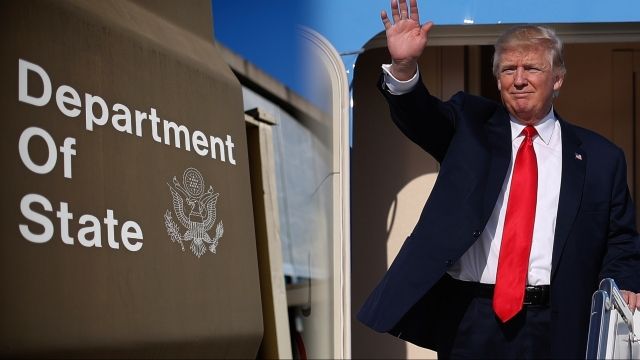 Social media was abuzz Monday afternoon after a post on an official State Department blog surfaced. The post was also published on the websites and social media accounts of multiple embassies.

The now-removed post, called "Mar-a-Lago: The winter White House," discussed the history of the club, including Trump's purchase of the then-estate in 1985.

It even explained that Trump bought the original owner's "decorations and furnishings ... preserving Mar-a-Lago's style and taste."

The post raises more concerns about the president's conflicts of interest.

Trump previously faced criticism following reports the club had doubled its initiation fee after he was elected president. The initiation fee is now reportedly $200,000.

The blog post was published April 4 — just two days before the Chinese president's visit to the southeast Florida club.

A month into the presidency, the Trump family's travel has likely already cost taxpayers over $10 million.

Trump's visits there have been the subject of a lot of discussion. Though some visits included hosting foreign leaders, many were recreational — and each has been estimated to cost taxpayers between $1 million and $3 million.

The article described Trump's visits as "belatedly fulfilling the dream of Mar-a-Lago's original owner and designer."

As the article describes, Marjorie Merriweather Post left the Mar-a-Lago estate to the U.S. government to be used by U.S. presidents, but they didn't use it. So the government gave the property back to the Post Foundation, which then sold it to Trump.

The State Department has replaced the article with the following statement: "The intention of the article was to inform the public about where the President has been hosting world leaders. We regret any misperception and have removed the post."