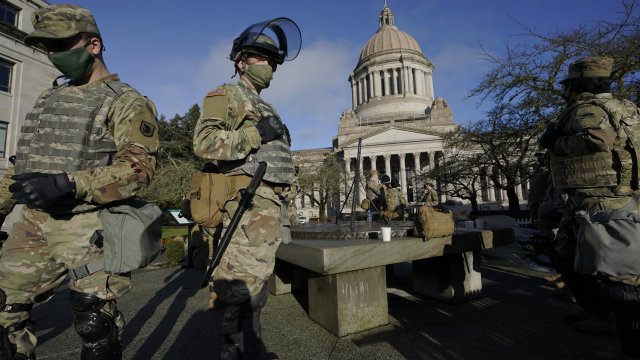 One-third of governors have called on the National Guard to aid local law enforcement officers.

Joe Biden will take his oath of office Wednesday in the same place mobs swarmed less than two weeks ago...on the west lawn of the U.S. Capitol building. And the threat of a destructive week ahead has forced extra security...not only in Washington but at statehouses across the country.

In what's typically a celebratory week, the aftermath of the January 6 Capitol riots has made legislative halls nationwide tense, with police and National Guard troops on duty and some statehouse buildings fenced and boarded up.

The FBI is watching for potential violence at armed protests at all 50 state's capitol buildings.

"We are seeing an extensive amount of concerning online chatter is the best way I would describe it about a number of events surrounding the inauguration."

Some 25,000 National Guard troops will be in D.C. this week and the National Mall will be shut down to keep people away.

Meanwhile, many state officials are hopeful they won't see a repeat of the U.S. Capitol riot in their buildings.

"Together with our law enforcement partners, we are prepared for the worst, but we remain hopeful that those who choose to demonstrate at our Capitol do so peacefully without violence or destruction of property."

More than a third of governors called out the National Guard to aid local law enforcement officers, and some governors issued states of emergency.

And the threat of insurrection isn't the only reason this year will be different than past inaugurations. COVID has forced the cancellation of the public parade from the Capitol to the White House, and members of Congress are being limited on the number of guests. There will also be no inaugural balls, and Tom Hanks will host a TV special in their place.

Even though it will be unusual this year, Biden's communications director says holding the inauguration is more than just swearing in a new president.

"I think that will send an incredibly important visual image to the world about the resilience of American democracy. So our plan and our expectation is that President-elect Biden will put his hand on the Bible with his family outside on the west side of the capitol on the 20."