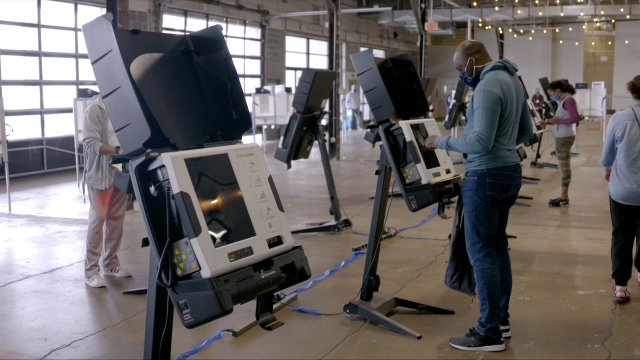 According to a tally by the Brennan Center, over 950 bills impacting voting or elections have been introduced in state legislatures this year.

State lawmakers across the country are considering hundreds of bills that would change the local laws around elections and voting.

More than 950 bills impacting voting or elections have been introduced in state legislatures this year, according to a tally by the nonpartisan Brennan Center. Over 70% of those would expand voting access.

"We hope that in places like Connecticut, New York, that some of these changes that were made to accommodate voters during the pandemic, are made permanent because it truly allows more people to vote," said Jessica Post, the president of the Democratic Legislative Campaign Committee.

But efforts to double down on election security have also increased since last year's election. About two-thirds of states are considering bills that include provisions like limiting mail-in voting, strengthening voter ID laws and maintaining the integrity of voter rolls. State and national Republicans have organized commissions on election integrity.

"We want to make sure that everybody knows when their vote is counted, has been counted for the candidate of their choice in the race of their choice, without any question about whether or not legitimate delays were justifiable or not, or whether or not nefarious activity could have existed," said Alabama Secretary of State John Merrill, who's co-chair of the GOP's election commission.

Both Democrats and Republicans say they want to learn from states that already have well-established election processes. But the two political ideologies often disagree on how to strike a balance between securing an election and ensuring voter access.

"You don't want to put unfair or unreasonable burdens on the voter, but you do want to make sure that you are requiring security, transparency and accountability in the process," said Merrill. "Our main goal is to make it easier to vote and harder to cheat in all 50 states."

Republicans, for example, support voter ID requirements for both in-person and mail-in voting. But Democrats worry those laws will disenfranchise voters, especially communities of color.

"This bill would prohibit, essentially, the mass mailing of early ballots to voters who did not request an early ballot."

“I think the voter suppression laws in both Georgia and Arizona and those legislators are very concerning. One, they are reducing the ability for folks to mail their ballot in, which will especially affect rural communities," said Post.

State legislatures are racing to pass election-related changes this year, ahead of the 2022 midterms. Meanwhile, Congress is considering its own voting rights legislation — HR 1, The For The People Act. It includes a mandatory nationwide early voting period, restores the right to vote for convicted felons and stops voter ID requirements. HR1 is expected to get a vote in the House during the first week of March.