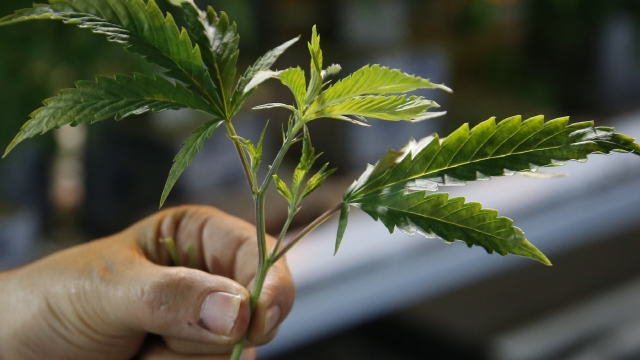 A record number of states could have seen marijuana legalized in 2020. Then coronavirus brought those efforts to a halt.

2020 was poised to be a banner year for marijuana, with a record number of states set to legalize pot in some form. Then the coronavirus put that momentum on hold.

"It looked like it was going to be a record year," said Karen O'Keefe, state policy director at the Marijuana Policy Project. "Now, of course, COVID has kind of ground everything to stop. A lot of state legislatures aren't meeting at all. If they are meeting, it's very rare. And just focused on budget related matters."

New York Gov. Andrew Cuomo admitted it's unlikely marijuana will be legalized in the state's legislature this year.

"Is the session effectively over? You know, it's up to the legislature, but I think it's fair to say it's effectively over," he told reporters at a briefing on Saturday.

Smart Approaches to Marijuana, one of the leading anti-legalization groups in the country, praised New York's failure to legalize pot this session, saying in a statement, "There is one less threat to public health for the time being."

Activists in Missouri, North Dakota, Oklahoma, Idaho and Nebraska have said they won't be able to get enough signatures to put marijuana legalization initiatives on 2020 ballots.

Legalization advocates say there are a few states that have already met the requirements to either get legalization measures on their ballots or are very close to doing so, but the overall loss has been significant.

"There would probably be three more states that legalize marijuana this year, which is still as many as ever have done so in one year. But it should have been twice that. There are a lot of other ballot measures that were in the works that a lot of money and effort had been put into that. But, you just can't collect signatures from people in the heart of the coronavirus cell," O'Keefe said.

Mikel Weisser is leading the charge to get an adult use marijuana initiative on the 2020 ballot in Arizona. He says he's already gotten over 320,000 signatures, well over the state's requirement for the measure to be considered for the ballot.

"I would not have made a prediction of victory because I don't like to make predictions, but damn, we're looking pretty good," Weisser said, adding: "If America returns to some sense of normality by this summer, we should be fine."

But Weisser admits coronavirus has slowed the campaign's momentum, forcing him to scrap plans to collect signatures all over the state.

"Oh, it's definitely had an impact. I had three weeks of events that canceled in one day of the week of the 16th, and that's when I pulled off the road," he said.

Still, Arizona seems primed to be one of just three states where voters will be able to decide whether or not to legalize recreational marijuana this year. South Dakota and New Jersey are the others.

"I feel a tremendous weight of responsibility getting it right," Weisser said. "If we become the only state in the nation that can have a ballot measure going, then it's all the more important that we do everything we possibly can."