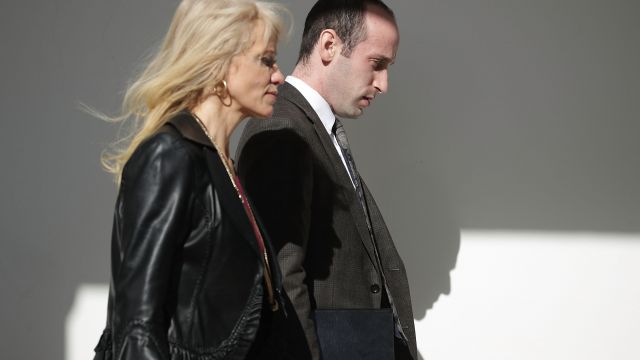 Stephen Miller started a lot of conversations online Sunday when he showed up on the political talk shows. But, who is he?

"It is a fact, and you will not deny it, that there are massive numbers of non-citizens in this country who are registered to vote. That is a scandal. We should stop the presses and as a country, we should be aghast!" Miller, the White House senior policy adviser, said on ABC's "This Week."

Miller's been President Trump's right-hand man for drafting policy since day one of his presidency. He even wrote part of that controversial travel ban executive order. But at age 31, his youth isn't the only thing drawing criticism.

"You've got a very young person in the White House on a power trip thinking that you can just write executive orders and tell all of your Cabinet agencies to go to hell," Joe Scarborough said on MSNBC's "Morning Joe."

Miller has also received a lot of attention for his connection to white nationalist Richard Spencer, who started the self-described "alt-right" movement. But Miller has condemned Spencer and his views.

The two were students at Duke University together. They were both involved in a conservative student organization, of which Miller was executive director. Spencer claims the two met frequently during their Duke days; however, Miller says it wasn't that much.

Miller, though, raised some eyebrows himself before ever having a connection to Spencer. Back in 2005, he wrote a column that ripped into his southern California high school. He called it a "center of political indoctrination" and said the left created a false sense of institutional racism at the school.

Since starting his job at the White House, though, he's stayed under the radar — until now.

Sunday morning, Miller appeared as a Trump administration representative on most of the political morning talk shows, including NBC's "Meet the Press," CBS's "Face the Nation" and ABC's "This Week."

Kellyanne Conway regularly represents the Trump administration on many of these Sunday morning shows. But at least one major news network has said it's reluctant to interview Conway over credibility concerns.

Correction: An earlier version of this article incorrectly said "Morning Joe" airs on CNN. It airs on MSNBC. The article has been updated.