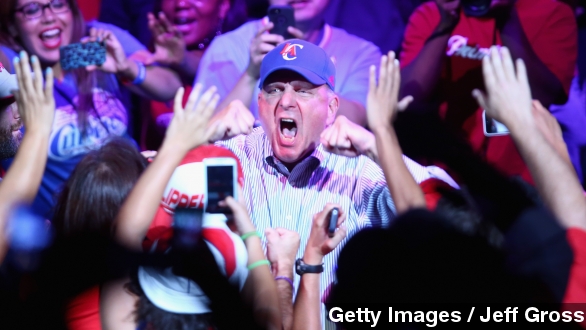 Steve Ballmer will ban his new team, the LA Clippers, from using any Apple devices and replace them with Microsoft counterparts.

If you’re Steve Ballmer, when you shell out $2 billion to buy the Clippers you’re probably at liberty to make some pretty specific demands.

Case in point, headlines today report the franchise’s new owner, and ex-Microsoft CEO, will ban all Apple devices from team use. (Video via Bloomberg)

Extreme, but is anyone surprised?

“I… LOVE… THIS… COMPANY (screams)” (Video via Youtube / Microsoft)

Sports and tech media covering the story seem to agree Ballmer is a Microsoft patriot.  He joined the company in 1980 as its 30th employee and went on to become CEO.  Today he retains even a larger share in the company than founder Bill Gates, at 3.99%. That’s worth $15 billion. (Video via Youtube / Microsoft)

USA Today says with that type of success “You can’t blame Ballmer for having loyalty to the company that he helped build and, in turn, made him a billionaire.”

No one knows for sure how far the owner's Apple censoring will reach.  Reports indicate all team iPads will be replaced with Surface tablets.  As for personal devices, it's hard to tell.  That didn’t stop writers from poking a little fun at the Apple fans on the Clippers.

From SB Nation, “Blake Griffin will have to fall in love with his new Surface … it'll be Lumias all around.”

Back to USA Today, “This is probably good news for J.J. Redick, as the iPhone 6 probably couldn’t have survived his skinny jeans.”

And Deadspin’s rule: iOS stays out of the paint. “The fate of the players' personal iPhones is left unknown, but it'd be wise not to use them around Ballmer.”

“Microsoft struck a multiyear deal with the NFL this season, one that provided all teams with Surfaces at an estimated cost of $400 million.”

And in the end, The Verge says the team's new Surfaces might never surface on-court, thanks to a $100 million deal Samsung struck with the NBA last year to become it's official tech supplier.

Ballmer’s ban will reported take place in 2016, so players have one more year to cherish — or hide — their iDevices.