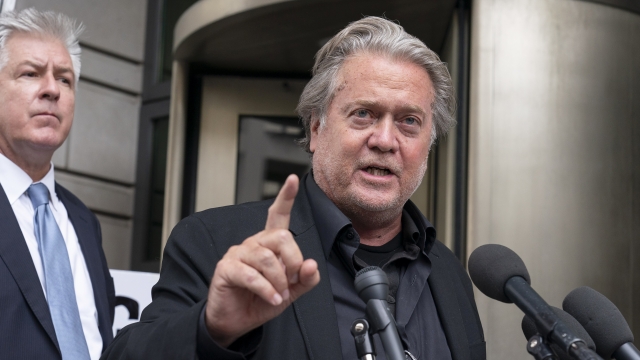 The 68-year-old Bannon faces up to two years in federal prison when he’s sentenced. Each count carries a minimum sentence of 30 days in jail.

Closing arguments were expected Friday in Steve Bannon's contempt of Congress trial, with the jury likely to get the case against the onetime Donald Trump ally.

Bannon is charged with two counts of criminal contempt for refusing to appear before the House committee investigating the Jan. 6, 2021 insurrection at the Capitol and the events leading up to the deadly riot. Each count carries a minimum of 30 days of jail and up to a year.

Bannon declined to testify Thursday and his lawyers did not call any witnesses, instead arguing the judge should dismiss the charges as unproven. U.S. District Judge Carl Nichols didn't immediately rule on the request.

Bannon was serving in an unofficial capacity to Trump at the time of the insurrection on Jan. 6, 2021. The committee, which held a prime time hearing Thursday that included Bannon comments of Trump's post-election strategy, wanted to speak with Bannon because it had information that he was actively involved in planning, logistics and fundraising for Trump's efforts to overturn the 2020 election and stop Congress from certifying Democrat Joe Biden's victory.

The panel's subpoena demanded any documents or communications relating to Trump and others in his orbit, including lawyer Rudy Giuliani and extremist groups such as the Proud Boys and the Oath Keepers.

Evan Corcoran, Bannon's lawyer, argued that the charges against him were politically motivated and that Bannon had been engaged in good-faith negotiations with the congressional committee over his concerns about testifying. "No one ignored the subpoena," Corcoran told the jury.

Corcoran has tried to establish that the deadline for Bannon to appear before the House committee was flexible, as long as the two sides were negotiating over the timing. He said testimony from the House panel's chief lawyer, Kristin Amerling, made it clear "that the dates were in flux."

Corcoran said that "no reasonable juror could conclude that Mr. Bannon refused to comply."

Bannon's team told the judge that Bannon saw no point in testifying at his trial since Nichols' previous rulings had gutted his avenues of defense. Among other things, Bannon's team was barred from calling as witnesses House Speaker Nancy Pelosi or members of the House panel.

Another Bannon lawyer, David Schoen, said Bannon "understands that he would be barred from telling the true facts."

Much of the trial testimony has been built around Amerling, who explained the extent to which the committee tried to engage Bannon and the timeline leading up to the missed deadline.

During cross examination Corcoran asked Amerling whether it was common for witnesses to appear before a congressional committee several weeks after the deadline date on a subpoena. Amerling answered "yes," but added only "when witnesses are cooperating with the committee."

Amerling said Bannon was uncooperative from the start, so there was no such leeway.

The committee heard nothing from Bannon until after the first deadline had passed, at which point his lawyer sent a letter to the committee stating that Bannon was protected by Trump's claim of executive privilege and would not be providing documents or appearing. The committee responded in writing that Trump's claim was invalid — Trump was no longer president, and Bannon was not employed at the White House at the time of the riot.

Assistant U.S. Attorney Amanda Vaughn told jurors that the subpoena issued to Bannon "wasn't optional. It wasn't a request, and it wasn't an invitation. It was mandatory." She added: "The defendant's failure to comply was deliberate. It wasn't an accident, it wasn't a mistake. It was a choice."

Bannon was indicted in November on two counts of criminal contempt of Congress, one month after the Justice Department received the House panel's referral.