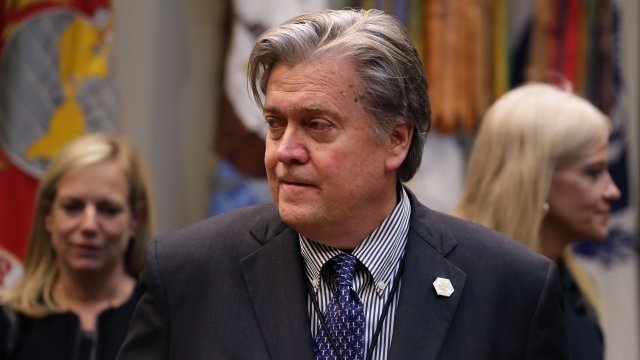 Steve Bannon has largely been able to stay under the radar during the Russia investigation.

President Trump is in the White House in large part thanks to Steve Bannon, his former campaign CEO and White House chief strategist. By all accounts, the president trusts him and has leaned on him for major decisions.

And yet Bannon has somehow been able to steer clear of the investigation into Russian meddling in last year's election. This despite the fact that he was a key aide when Trump decided to fire Lt. Gen. Mike Flynn, who recently pleaded guilty to lying to the FBI, and amid reports he counseled Trump before FBI Director James Comey was fired.

Bannon has apparently told friends he's not worried at all about any exposure and that he doesn't even have a lawyer. There's almost no way to know if the special counsel Robert Mueller has interviewed Bannon because that team has been mum about everything it's doing.

But we do know Congress wants to talk to Trump's former right-hand man. Rep. Adam Schiff on the House Intelligence Committee put it this way: "I think it'll be very important at an appropriate time to bring him before the committee. There are a whole range of issues we need to talk to him about."

Experts believe Bannon would be able to fill in some of the gaps in the administration's thinking before decisions to fire Flynn and Comey. Bannon also played mediator between the Trump campaign and Cambridge Analytica, a data company suspected of being connected to Russia.

And Bannon is uniquely qualified to be able to do that. The president leaned on him a lot during the campaign and while he was in the White House. It seems he was part of almost every big decision and conversation, whether or not the president took his advice.

One former federal prosecutor told Politico: "If he's saying, 'Don't do this. This is a political disaster,' and the president does it anyway, what he has to say might be helpful to the Mueller team in an obstruction case."