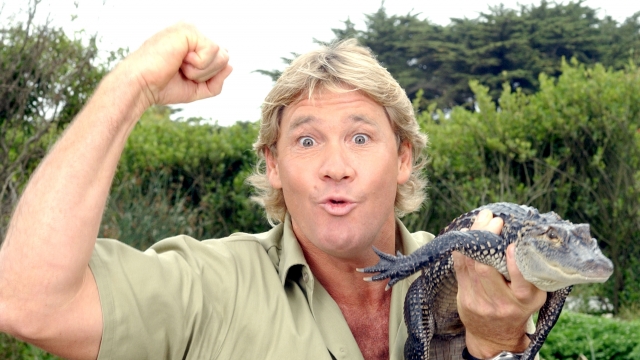 Bob Irwin, Steve's father, found the note while researching for his book, 'The Last Crocodile Hunter: A Father and Son Legacy.'

A piece of Steve Irwin's legacy lives on — the crocodile hunter's father has shared a personal note Irwin wrote before he died.

Bob Irwin, Steve's father, only found the note last year, despite the zoologist's passing a decade ago.

The handwritten note reportedly fell out of a book the senior Irwin was using for research on his own book, "The Last Crocodile Hunter: A Father and Son Legacy."

The note was addressed to Steve's mother and father and inscribed "Please be happy to know that your strength and wisdom have been passed on."

Steve went on to thank his parents for everything they'd provided and wrote, "It takes over 30 years to realize how essential you have been to build my character, my ethics and, most importantly, my happiness."

Crikey! Could Steve Irwin's Face Be On Australian Currency?

Five Australian teens started a petition to get "the all time greatest Australian bloke" on a coin or note.

Irwin was famous for the television show, "The Crocodile Hunter" and various other nature documentary projects.

Irwin died at the age of 44 while on a trip in Australia to film a documentary series called "Ocean's Deadliest."

Irwin reportedly approached a large stingray in chest-deep water to film it swimming. The creature began thrashing its tail and pierced Irwin's heart with a barb.

Now, the hunter's legacy is living on through his family.

Steve's daughter, Bindi Irwin, has appeared in television series and worked on conservation projects since her father's passing. She also reportedly spends much of her time at Australia Zoo.

Irwin ended the note by thanking his parents. He called them his "best friends."