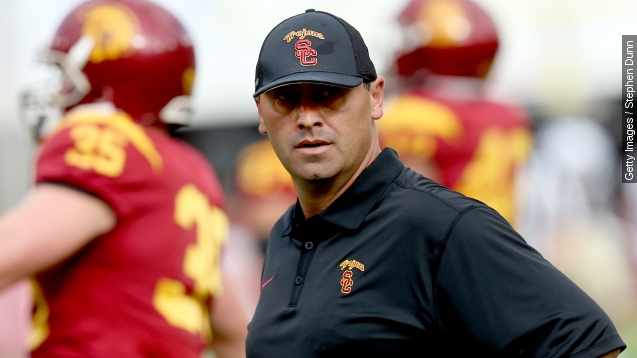 The former USC head football coach was fired in October after a string of reported incidents involving alcohol.

Former USC head football coach Steve Sarkisian reportedly wants the school to pay him more than $30 million after he says it wrongfully fired him for a disability in October.

Sarkisian was fired from USC after his reported involvement in a string of incidents involving alcohol. He filed the lawsuit in California.

Sarkisian's lawyer told TMZ: "Alcoholism is a recognized disability under California law. So firing somebody because of that disability is against the law."

Reports about Sarkisian's relationship with alcohol first surfaced after a USC boosters event where an apparently intoxicated Sarkisian shouted obscenities during a speech. (Video via Los Angeles Times)

"When you mix meds with alcohol, sometimes you say things and or do things that you regret, and I regret it. I'm sorry, Sarkisian said.

Sarkisian apologized for the outburst and promised to seek treatment, but things didn't improve.

He reportedly showed up to practice drunk about two weeks later and was told to leave the USC facilities. He was placed on leave by the school's Athletic Director Pat Haden and was fired a day later.

The lawsuit alleges the school didn't accommodate his disability and should pay him the remainder of his contract. As of Monday afternoon, USC hadn't responded to the reports.