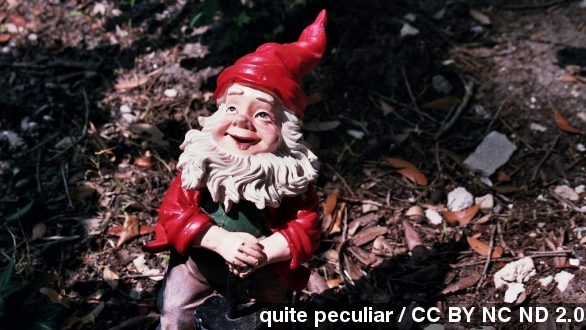 A garden gnome was stolen from a Washington state couple this summer. Turns out a prankster took it on a wild vacation.

A Washington state couple had their garden gnome stolen from their front porch this summer. They figured they'd never see it again.

"When a gnome disappears, you never know if he's going to come back," owner Bret Kraupie told KOMO.

So imagine their surprise when they came home Tuesday and saw their gnome — which is named Jimmy — sitting on the front step with an envelope full of photos, according to KOMO.

"Someone on a summer vacation decided to take Jimmy along for the ride. They crossed state lines, hit national landmarks, taking pictures all the way to Texas," KOMO reporter Lindsay Cohen said.

And ABC's Dan Harris couldn't help himself when it came time to report that no one knows who the thief is.

"Not saying a word. Mum's the word," Harris replied.

But Jimmy the Gnome wasn't the first of his kind to do a little globetrotting. Travelocity has built an entire ad campaign around a gnome on the go.

And others have pulled that traveling-gnome prank before.

For example, in 2005, a gnome was stolen out of Washington state resident Marianne Severson's garden and returned with photographic proof he'd met several celebrities, including Paris Hilton.

"I really didn't know it was Paris Hilton until I read the caption in the magazine," Severson said.

Of course, gnome way of gnome-ing if the same person stole that gnome.