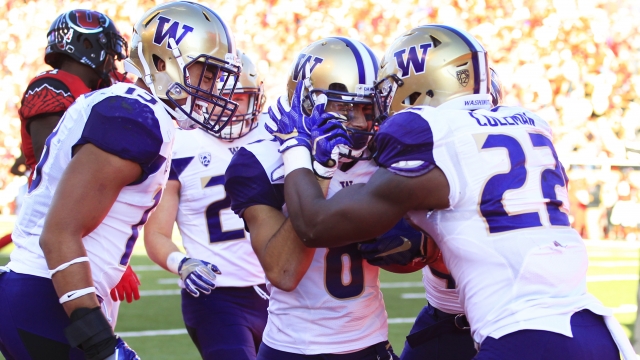 In most sports, win-loss record tells all — not so for college football.

College football fans have heard a certain three-word phrase a lot these past few weeks.

Strength of schedule — in other words, how good the teams you play against are. It's a huge factor in whether a team can make the College Football Playoff, and the selection committee says so. Thing is, it's sometimes at odds with how often a team wins.

If you've got a strong schedule like a team in the SEC, you might be forgiven for a loss or two. But other teams, like Washington this year, could see their playoff chances plummet if they lose just one game.

SEE MORE: The College Football Arms Race Is Upon Us

On its face, the solution to Washington's problem is pretty simple: play tougher teams. But there are a lot of roadblocks to getting a stronger schedule and beefing up your playoff resume.

For one, you're never really sure how good a scheduled opponent is. When Washington beat Stanford early this season, that looked like a big win for the Huskies. But then Stanford lost two of their next three games, and now the win is kind of an afterthought.

Teams could schedule tougher nonconference games early in the season, but those dates are filling up fast — so fast that teams are announcing games scheduled for as late as 2031.

And when a team has a weak schedule, it's often under pressure to win games by lopsided margins to win the committee's favor. Louisville coach Bobby Petrino has this problem, and he isn't a fan.

"It's sad because there's something called sportsmanship, but maybe I made a mistake. Maybe looking back at it in Florida State, we should have kept all the starters in and scored 80 points and did that, but I don't understand why it's like that," Petrino said after his team's blowout win over Boston College on Saturday.

SEE MORE: The Real Money In College Sports Isn't Made By The NCAA

The playoff committee says it doesn't factor in margin of victory when ranking teams. It does look at how well teams play week to week, though, which doesn't always match up with whether or not they win.

"Now, Louisville, you didn't help their case — two of the last three weeks, against Duke and against Virginia, you didn't play so well," ACC Network analyst Stan Norfleet said.

All teams can really do at this point is try to win as many games as possible — even though that's far from the only thing the selection committee will be looking at.